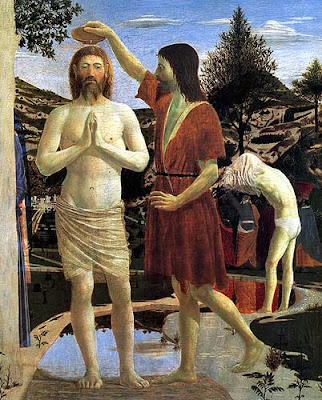 The Archbishop of Westminster has urged the National Gallery to give up a Renaissance masterpiece, calling it "a work of faith" rather than art.

Cardinal Cormac Murphy-O'Connor says that The Baptism of Christ, painted by Piero della Francesca in the 1450s should be in Westminster Cathedral.

"It is a mistake to treat it as a work of art, it is a work of faith and piety," he said.

The painting has been in the gallery's collection since 1861.

"I would like to see this painting taken down from the walls of the National Gallery and placed in a Catholic church in London," the Cardinal said in a lecture for the Royal Fine Art Commission Trust.

"It is an expression of the Church's life and a way into prayer. I will willingly offer Westminster Cathedral as the new home for this painting, it should be restored to a religious setting.

The Cardinal promised the director of the National Gallery that the church would "cherish this Catholic treasure".

The artwork, which is painted on poplar, is so delicate that its preservation is ensured by constant gallery care with temperature, humidity and light levels all controlled.

The painting has not been moved from the gallery since World War II, when it was evacuated to Wales during the Blitz. It is too delicate to be loaned to other institutions

The National Gallery has said that visitors were welcome to pray in front of the painting where it hangs in the Salisbury Wing.

"For some, Piero's Baptism is a masterly artistic exercise in perspective and mathematical composition. For others, these aspects are intimately linked with Piero's ability to set the protagonists of the Christian story into a rigorously, even miraculously described universe."

"By seeing the picture at the National Gallery, in an especially secluded room which evokes a chapel setting, visitors can experience this masterpiece in any number of ways, according to their beliefs or, indeed, lack of beliefs," he added.

The painting was bought by the National Gallery in 1861 from the Camaldolese Abbey, now cathedral, at Borgo Sansepolcro, the artist's native town in Italy.