Cardinal Biffi: Christian teachings do not change with the times 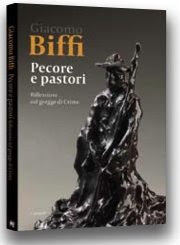 Cardinal Giacomo Biffi, the retired Archbishop of Bologna, has written a new book which stresses the primacy of conversion in Christian life and argues against the refashioning of Christianity to appeal to current ways of thinking.

The cardinal commented on his book, titled “Sheep and Shepherds,” in comments reproduced by Vatican analyst Sandro Magister.

Explaining his title, the cardinal said:

“Everyone in the Church is, before anything else, a member of the flock of Christ. Everyone, from the pope to the most recently baptized, bears the true nature of his greatness not so much in being entrusted with this or that role in the Christian community, as in being part of the 'little flock.' There is, therefore, substantial equality among all believers, as long as they truly believe: only by believing does one enter among Christ's sheep.”

And yet, some people seem to measure the truth of the faith by modern society’s standards. As Cardinal Biffi writes: “Sometimes, in some areas of the Catholic world, people even come to the point of thinking that divine Revelation must adapt itself to the current mentality in order to be credible, instead of the current mentality converting in the light that comes to us from on high. And yet one must reflect on the fact that it is 'conversion,' and not 'adaptation,' that is the evangelical term.”

The drive to adapt Christian faith to current thought can even obscure the divinity of Jesus, echoing the Arian heresy which denied His divinity.

“As paradoxical as this statement may seem, the Arian question is always the order of the day in ecclesial life,” Cardinal Biffi said, according to Magister. “The pretexts can be many: from the desire to feel that Christ is closer and is more one of us, to the proposal of making it easier to understand him by exalting almost exclusively his social and humanitarian aspects. In the end, the result is always that of stripping the Redeemer of man of his radical uniqueness, and classifying him as someone who can be managed and domesticated.”

In this respect, the cardinal said, the ancient Council of Nicea which condemned Arianism is “much more relevant today” than the Second Vatican Council.

One chapter of “Sheep and Shepherds” defends chastity by referencing the words of Jesus in the Gospels, the letters of St. Paul, and other parts of Scripture. The chapter was published on the internet by Magister.

Noting that the Church’s witness of chastity has been perceived by the world to be “something burdensome and repulsive” since the beginning, Biffi noted how the Christian emphasis on chastity continues to challenge the world.

In its first encounter with the Greco-Roman world, the cardinal writes in his book, “Christianity had to come to terms with a culture marked by a conception of eroticism, by a practice of sexuality, by a system of marriage that was immediately perceived as foreign to the character of the Gospel, and even as contrary to the new humanity… .”

Christian chastity is not based in “mistrust of what is material and corporal” but “is fostered and expresses itself with respect toward the body, which in the Christian perspective is held to be a sacred reality and an instrument of sanctification.”

The Christian approach to modern-day homosexuality, Cardinal Biffi said, must distinguish between the respect due to persons and the “necessary repudiation of any exalted ideology of homosexuality.” He also described St. Paul’s theological interpretation of “the rampant ideological and cultural aberration in this area,” adding that this “aberration” is “at the same time the proof and the result of the exclusion of God from collective attention and social life, and of the refusal to give him due praise.”

Excluding God from western culture “has had the consequence, almost as an inevitable punishment, of the spread of an aberrant sexual ideology, with an arrogance unknown to previous times.”

According to the cardinal, Christ touched on sexual matters “only a few times and always in a sober manner, although at the same time unmistakable and resolute.” Rejecting not only pagan habits but also some widespread Hebrew ones, the cardinal explained, “Jesus does not hesitate to include violations against chastity among the behaviors that threaten the dignity of man and his interior purity.”

The corruption of the “heart” is the source of the responsibility and the guilt of the actions committed.

Cardinal Biffi also decried the “sort of pansexualism” of society now ubiquitous in entertainment and advertising, saying Christian teaching on chastity is “a challenge that still keeps its relevance intact today. In a certain respect, it has even become more necessary and more urgent.”

“We sometimes get the impression that we have been influenced and taken in by a mysterious cabal of maniacs who are imposing their own degenerate mentality on everyone else. They are the same ones who never fail to call bigots and prudes those who are not convinced by their lofty arguments.”