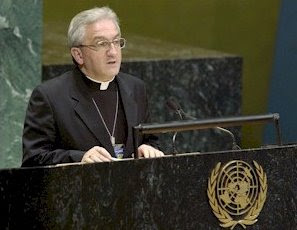 In recent weeks, the Holy See has made a series of strong interventions at the United Nations (UN), upholding the dignity of human life while criticizing UN treaty compliance committees for overstepping their mandates by encroaching upon state sovereignty.

In advance of the debate on the Moratorium on the Use of the Death Penalty, the Holy See reminded delegates at the General Assembly (GA) that the most fundamental right is the right to life “from the moment of conception to natural death.”

While it welcomed efforts to halt the use of the death penalty, it noted the need to foster a culture “in which life is respected at all stages of development.”

Following up on this theme, the Holy See on a separate occasion noted the existence of ambiguous language concerning “sexual and reproductive health” and “maternal health services” that appeared in a resolution on obstetric fistula, clarifying that such language cannot be interpreted as endorsing abortion. Similar interventions were made by the United States and Saint Lucia.

The latter term had never before appeared in a fistula resolution, and statements such as the Holy See’s help inoculate against abortion proponents subsequently reinterpreting the phrase to include abortion.

Perhaps the Holy See’s most significant statement, however, occurred on the theme of “Rule of Law” before the GA’s Sixth Committee, which is the primary forum for the consideration of legal questions.

The Holy See’s nuncio, Archbishop Celestino Migliore, spoke of the role of international treaty making in enhancing the rule of law. He underscored, however, that UN agencies and compliance committees (also known as treaty bodies) set up under various UN human rights treaties must “respect the intent and desire of States.”

The nuncio warned against a treaty body system “which moves away from the original intent of the parties and expands its mandates beyond the power given by States.”

Certain compliance committees, often comprised of unelected and unaccountable representatives drawn from activist non-governmental organizations, have in many instances overstepped their mandates by seeking to pressure sovereign nations to change their laws on abortion, reading a “right to abortion” into treaties that are silent on the subject.

Such countries ratified treaties like the Convention on the Elimination of All Forms of Discrimination Against Women (CEDAW) and the International Covenant on Civil and Political Rights (ICCPR) never intending that domestic legislation and – in the case of nations like El Salvador, Chile and Madagascar – their constitutional protections for unborn life could be threatened by treaties reinterpreted to include a right to abortion.

Recent examples include statements by the Human Rights Committee – the compliance committee charged with monitoring implementation of the ICCPR – pressing Nicaragua on its laws protecting unborn life and the perennial pressure members of the CEDAW committee place on representatives from pro-life nations to change their laws on abortion.