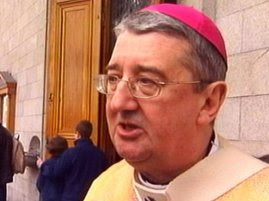 ECONOMIC CHALLENGES facing Dublin's Catholic archdiocese were "quite dramatic" due to the current turmoil in finances worldwide and the crash of Ireland's property market, Archbishop Diarmuid Martin has said.

Expressing a hope that there would not have to be cutbacks in services provided by the church, he said "disposable income is limited, and we have no idea where the money is coming from for church activities".

He said "services to the poor cost more, as do food shelters, but when we need to provide them the money must be found to do so".

The archdiocese was "facing the same challenges as everyone else".

Archbishop Martin was speaking at a press conference in Maynooth yesterday as the Irish Episcopal Conference continued its three-day winter meeting, which ends today.

He was accompanied at the press conference by the newly ordained Bishop of Down and Connor, Most Rev Noel Traenor.

The archbishop said less than 5 per cent of the Dublin archdiocese's income came from investments, but "indications are this will be non-existent next year".

Church collections were responsible for 70 per cent of the annual income in Dublin, while the remainder in recent years had been from the sale of assets, mainly property. "This has probably dried up completely."

It had "produced money for various uses, and not just for compensation ". This resource was "also used for projects in parishes".

"We will now have to put a clear stop to a number of important projects. But we still need new churches and older ones need maintenance. The Pro-Cathedral needs serious investment."

Yet advice from the archdiocese's financial advisers was "pretty dramatic where the future is concerned and the unknowns there".

As things are so tight in the Diocese might we suggest most definitely NOT GOING AHEAD with the renovations INSIDE Our Lady Queen of Peace Church in Bray which have been approved by Archbishop's House at the request of the Parish Priest Fr. Larry White. The ordinary Parishioners were NOT asked to vote on it or to give their views or were even consulted. The MAJORITY of the Parishioners are calling what is going to be done to the Altar area a DESECRATION of the beautiful Altar that is already there. They and their families raised the money to build this Church back in 1946 and like the inside as it is.

YOUR GRACE ARCHBISHOP DIARMUID MARTIN please take note. You want to save money in the Diocese - well STOP THE DESECRATION OF THE INSIDE OF OUR LADY QUEEN OF PEACE CHURCH BRAY P - L - E - A - S - E!