Reflecting the Truth of Pope Pacelli 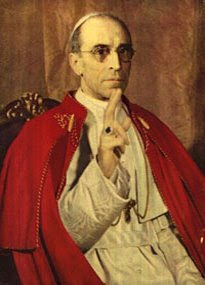 November in Rome offers time for reflection, as the usual local exuberance is tempered by the encroaching darkness of winter.

A new exhibit on the life of Pope Pius XII in the Charlemagne wing of St. Peter's Basilica offers the possibility to pilgrims, students and the simply curious to examine the multiple facets of this Pope's remarkable life.

"Pius XII: The Man and the Pontificate" opened on Nov. 6 and will remain until Dec. 5. It has no admission fee; all are invited to come and learn more about this much maligned and misunderstood Pontiff.

An impressive array of sponsors put the show together, drawing on archives from Argentina, Hungary, Uruguay, Brazil, France and Germany, as well as Vatican archival material. The Italian state television RAI and Vatican Radio offered footage and recordings, while scholars from all over the globe produced the astonishing quantity of didactic material.

The first few displays introduce the visitors to the young Roman boy, Eugenio Pacelli, born into a devout family of successful professionals. Even as a youngster living near Piazza Navona, he distinguished himself through his love of music and reading.

At eight years old, Eugenio began spiritual direction with Father Giuseppe Laus of the Oratory of St. Philip Neri. This connection with the Oratorians would fuel his spirit of galvanizing the laypeople into preaching and living the Gospel in their lives and actions.

Eugenio Pacelli soon entered the seminary and on April 2, 1899, Easter Sunday, he was ordained a priest. A photograph from that happy era shows light radiating on a high intelligent brow and his direct gaze warmly engaging the viewer. Comparing this serene and hopeful portrait with later pictures, underscores how much his times and trials marked him.

The exhibit is biographical, and traces the various steps of Pacelli's life from his ordination as bishop in the Sistine Chapel in 1917, his years as nuncio in Germany, his rise to cardinal and election to the papacy. Scattered amid the chronological narrative are some shimmering moments that bring out various facets of the nuanced personality of Pope Pius XII.

A jeweled ring sitting in a glass case carries an unusual history. It was Pacelli's bishop ring from his ordination to the episcopate, which in 1958, he slipped off his own finger to give to the neo-archbishop of Montreal. The ring was then given to Pope Paul VI who returned it to the Pacelli family.

Also from the Pacelli family archives is a letter written from Bishop Pacelli to his brother on Oct. 2, 1928, imploring him to intercede to prevent him from being made cardinal and "condemned to purely bureaucratic work in the congregations."

Bishop Pacelli begs to remain in Germany where he can be of much greater assistance to the relationship between the Church and Germany.

The German Catholics loved Eugenio Pacelli for his galvanization of the faith among the laity. He strongly promoted Katholiktag every year, when thousands of Catholics gathered together to affirm their identity and pray.

Undoubtedly many of the connections forged in those days became crucial to the network of Christians helping refugees during the era of Hitler.

Photographs record Bishop Pacelli's visits to prison camps to ensure better treatment for prisoners and the release of the ill or infirm. Eugenio Pacelli also set up the Ufficio Informativo Vaticano to let families know the whereabouts of prisoners of war.

Another picture shows the bishop in miner's gear, visiting the mining camps to learn about the conditions of workers.

Bishop Pacelli's ceaseless desire to learn about all branches of human activity brought him to converse with Einstein, while another photo has him standing with Gugliermo Marconi, inventor of the radio.

Marconi would oversee the design of Vatican Radio and Pope Pius XII would embrace the invention, delighting in the ability to reach more and more people throughout the world.

As his mission became increasingly universal, Pacelli studied constantly to keep up with the developments of the modern age. Health workers, scientists and philosophers were all amazed by the versatility and depth of his knowledge.

Eugenio Pacelli was elected Pope in 1939 just as the situation in Germany was rapidly deteriorating. The exhibition, in its attempt to move beyond the malicious slander of Pius' alleged collaboration with Hitler's regime, offers just a few telling photos, such as Jewish refugees hidden in his summer home of Castel Gandolfo.

Sadly, it does not pause to present the worldwide thanks and tributes offered to Pope Pius after the war by Golda Meir and many others, long before the campaign of lies initiated by the 1963 play "The Deputy."

"We are either with Christ or against Christ," announced Pope Pius XII in his Christmas message of 1947, prophetic words which defined his own life.

His message and his example are sorely needed in our times, but his words have been drowned out by the torrent of falsehoods poured out from Eastern Europe and channeled through the West.