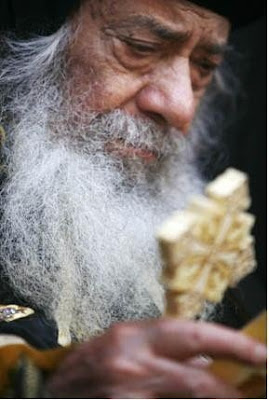 Coptic Pope Shenuda III has banned Egyptian Christians from praying in a church-owned building in Cairo after sectarian clashes there with Muslims, state news agency MENA reported on Tuesday.

Police arrested at least eight men after Muslims on Sunday night clashed with Copts in the Cairo neighbourhood of Ein Shams in protest at the building's use as a Christian prayer hall, throwing stones and burning two cars.

Pope Shenuda III "has ordered a cessation to prayers in the building belonging to the Church of Virgin Mary... after confrontations between the worshippers and some of the neighbourhood's residents in front of the building," the agency quoted him as saying.

The building was a disused factory that the church had bought.

Copts complain of an antiquated law, inherited from when Egypt was under Ottoman rule, that obliges them to secure presidential permission before building a church or expanding an existing church.

Egyptian President Hosni Mubarak has delegated such decisions to provincial governors, but human rights groups say that sectarian problems will persist until the state passes a single law for both Muslim and Christian places of worship.