Pope to 138 Islamic scholars, continue dialogue on the basis of respect of the person 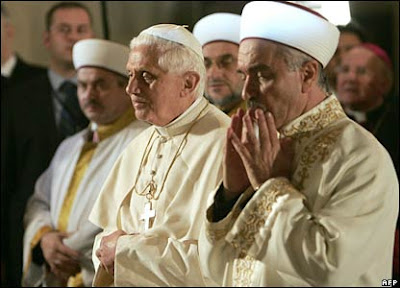 Benedict XVI has replied to the letter sent on 13 October by 138 Muslim scholars. In his response the Holy Father invites Prince Ghazi bin Muhammad bin Talal, who was behind the initiative, to visit the Vatican with a delegation of signatories, the latter to continue their dialogue with the Pontifical Council for Inter-religious Dialogue.

In his reply, which was released today by the Vatican, the Pope reiterates the importance of dialogue based on actual respect for the dignity of the person, on objective knowledge of the other's religion, on the sharing of religious experience, and on a joint commitment to promote mutual respect and acceptance.

In the letter, signed by Cardinal Secretary of State Tarcisio Bertone, Benedict XVI expresses first of all his “gratitude” to Prince Ghazi and all the other signatories, noting “his deep appreciation for this gesture, for the positive spirit which inspired the text and for the call for a common commitment to promoting peace in the world.”

“Without ignoring or downplaying our differences as Christians and Muslims, we can and therefore should look to what unites us, namely, belief in the one God, the provident Creator and universal Judge who at the end of time will deal with each person according to his or her actions. We are all called to commit ourselves totally to him and to obey his sacred will.”

The letter also mentions that in the Pope’s Encyclical Deus Caritas Est (“God is Love”) stress is placed in particular on the twofold commandment to love God and one’s neighbour.

From the beginning of his pontificate, Benedict XVI has said that he is profoundly convinced of the need to “affirm the values of mutual respect, solidarity and peace,” and that the “life of every human being is sacred, both for Christians and for Muslims.”

The letter goes on to say that “[s]uch common ground allows us to base dialogue on effective respect for the dignity of every human person, on objective knowledge of the religion of the other, on the sharing of religious experience and, finally, on common commitment to promoting mutual respect and acceptance among the younger generation.”

“The Pope,” it says, “is confident that, once this is achieved, it will be possible to cooperate in a productive way in the areas of culture and society, and for the promotion of justice and peace in society and throughout the world.”