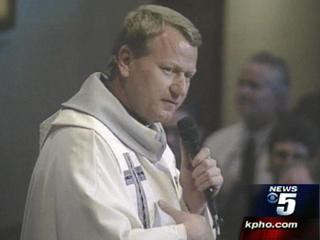 When 550 people turn up for a first-time worship service on a Thanksgiving morning, the question is asked: Where did they come from?

The magnetism and the following that Catholic priest Dale Fushek developed during 20 years as pastor of St. Timothy’s Catholic Community in Mesa may still be alive two years after he was indicted on seven misdemeanor charges of sex-related behavior with male teens on that campus between 1984 and 1994.

Fushek is on administrative leave from the Roman Catholic Diocese of Phoenix and cannot represent himself as a priest, pending the resolution of his case.

Though he waits for the Arizona Supreme Court to rule on whether he should be allowed to have a jury trial, Fushek is applying his personal style of spirituality to the Praise and Worship Center, which was launched Thursday morning at the Mesa Convention Center with a two hour service.

The ministry is billed as nondenominational and intended to complement — not take the place of — people’s primary worship elsewhere.

The next service is expected to be Dec. 23.

Thursday’s services featured prayer, music, praise and a message. But it was not a Mass, nor was the Holy Eucharist served — steps that would have violated Catholic canons.

“When he was put on administrative leave, he was told not to administer the sacraments and to not present himself as a priest,” Jim Dwyer, spokesman for the Catholic Diocese of Phoenix, said Friday.

“If he is not violating that, we wouldn’t have to know specifically what he is doing.”

The Praise and Worship Center answers some key questions about the new ministry on a Web site, http://www.praiseandworshipcenter.net/.

The site spells out the ministry’s mission statement, among other things.Fushek, 55, faces one count of assault, five counts of contributing to the delinquency of a minor and one count of indecent exposure.

Teens complained that he carried on sexually explicit discussions with them during confession, exposed himself to them as he got into his hot tub and created a sexually charged setting with teens present.

Fushek founded Life Teen, one of the largest international Catholic teen organizations that today has about 120,000 youths enrolled in 1,080 programs in 20 countries.

Dwyer said Catholic leaders had been aware that Fushek and others were exploring their new ministry.

“We heard about some of the promotional materials that were done, but we didn’t know if it was ever going to take place,” Dwyer said. “We made it clear to the Catholics at St. Timothy’s that it wouldn’t be (regarded as) an official Catholic service. But other than that, we have no control on what he does as a Catholic citizen.”

Fushek told the Tribune after the service Thursday that he was resigning from the priesthood, but Dwyer said the diocese has not received notification.

“I am not aware of any official resignation, and his status really hasn’t changed,” Dwyer said.

“He definitely would have to contact the bishop first and go through some formal process.”

Mark Dipree, a former priest, is working with Fushek in the ministry.

The Web site listed 2029 N. Alma School Road, Suite 107-14, Chandler as the address for the Praise and Worship Center, but the location is a mail drop, not a church office.

If Fushek is convicted, he likely would have to register as a sex offender, which would restrict him from being around youth.

A Web site called http://www.helpmonsignordale.com/ continues to solicit funds for Fushek’s legal defense, and it uses the same address as the Praise and Worship Center.

“He misses the community that was removed from his life. ... He misses working with the youth,” that site notes.

Bishop Thomas O’Brien, then head of the Phoenix diocese, bestowed the “monsignor” title on him in 2002 when he was also the diocese’s vicar general and second in command for the diocese.