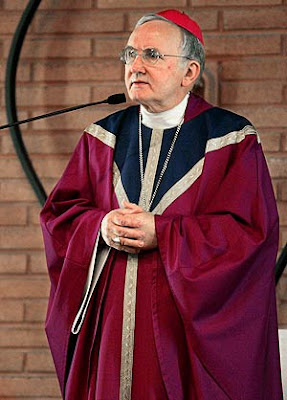 A contempt-of-court citation against the Roman Catholic bishop Tod Brown of Orange County has been dropped as part of a nearly $7-million sexual abuse settlement, attorneys said Wednesday.

But the opposing sides disagreed over what led to the action.

Lawyers for the four women allegedly molested by Catholic school and parish employees said the diocese forced them to drop their bid for the citation.

"The diocese insisted that it be done this way or they would have refused to pay our clients," said John Manly, a spokesman for the women.

But Peter Callahan, an attorney for the diocese, said the contempt case was dismissed by the court because it lacked merit.

"I would have welcomed the opportunity to present our case in open court," he said. "It was a totally malicious and non-meritorious claim."

The contempt citation had been requested by the accusers' attorneys after Brown sent an associate, Msgr. John Urell, to Canada for medical treatment before he could complete a deposition in one of the cases. Manly and the other plaintiffs' attorneys had planned to call Urell as a witness because he had handled allegations of abuse against the diocese.

Attorneys for the diocese and Urell, on the other hand, maintained that he suffered from an acute anxiety disorder that prevented him from testifying.

The judge had begun contempt proceedings against the bishop last month, but then postponed the hearing until Dec. 3.

On Nov. 20, meanwhile, the two sides reached a settlement agreement in which the diocese paid the plaintiffs nearly $7 million. It was not until Wednesday that attorneys announced that the contempt citation had been dropped.

"Removal of the citation was not a prerequisite for settlement," the diocese insisted in a statement. "Diocesan legal counsel were fully prepared to respond to [the] attempt to besmirch Bishop Brown's character. . . ."

Manly's office shot back a statement of its own. "This is simply untrue," it said. "The victims wish to express shock and disbelief that Bishop Tod Brown . . . would attempt to mislead the public once again. . . ."

At least one person, Brown himself, was apparently expressing relief.

"Our faith is in large measure founded on the concept of forgiveness," he said in the diocesan statement. "The recent settlements are but one measure of our sincere regret for the events of the past."