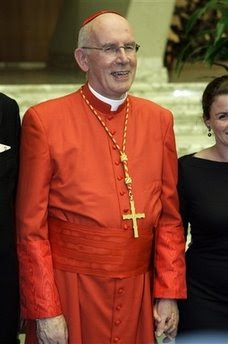 Final preparations were under way last night for the homecoming of His Eminence Cardinal Sean Brady today following his elevation to the College of Cardinals by Pope Benedict XVI.

Taoiseach Bertie Ahern will greet the Cardinal at Dublin Airport before he attends a Liturgical Service of Welcome at the Airport Church at 11am.

Presided over by Archbishop Diarmuid Martin, the Church of Ireland Archbishop of Dublin, John Neill, will be at the event with representatives of other churches while children from local parish schools in Swords will sing.

The Archbishop of Armagh since October 1996, Cardinal Brady will also celebrate Mass in St Patrick's Cathedral, Armagh, at 8pm.

The Parish of Armagh has even asked schools in the city not to be give homework to pupils today so youngsters and their parents can honour the new Cardinal.

On Saturday, the 68-year-old Cavan man said he was humbled and honoured to have been bestowed with the red skull cap and beretta from the Pope.

For the first time in history there were three Cardinals - known as princes of the church - on the island of Ireland. Cardinal Cahal Daly and Cardinal Desmond Connell joined Irish Archbishops and

Bishops, and Cardinal Brady's family and friends for the moving ceremony in the Vatican.

President Mary McAleese and representatives of the Irish Government and Northern Ireland Executive and Assembly, who also attended the service, paid tribute to the Cardinal for his role in behalf of the peace process.

Arriving just outside Armagh at 7pm, he will board an open-top vehicle to parade through the town flanked by members of the Scouts, Order of Malta and Knights of St Columbanus.

Ordained in February 1964, Cardinal Brady returned to Cavan to teach at St Patrick's in 1967.