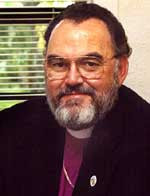 On Wednesday, November 21, Bishop John B. Lipscomb announced his intention to seek release from his Episcopal vows and come into full communion with the Catholic Church.

Lipscomb, 57, stepped down as Bishop of the Southwest Florida Diocese of the Episcopal Church due to health reasons on September 15 after serving for ten years.

In an open letter to the diocese the bishop indicated that he had written Presiding Bishop Katharine Jefferts Schori, requesting “to be released from my ordination vows and the obligations and responsibilities of a member of the House of Bishops. I have taken this step in order to be received into the Catholic Church… Through a long season of prayer and reflection Marcie and I have come to believe this is the leading of the Holy Spirit and God’s call for us for the next chapter of our lives.”

The Rev. Dabney T. Smith is the current bishop of the Episcopal Diocese of Southwest Florida which has 33,000 members. He learned of Lipscomb's plans on Tuesday.

Smith was elected bishop co-adjutor in 2006 but soon found himself acting as the diocesan when Lipscomb announced that he would be going on medical leave.

In a statement, Smith wished his friend well. "I am pleased that he and Marcie have found their place of spiritual solace," he said.

"I know his love for the Anglican Communion, but I also know his disappointment in the direction that the American province is taking," said Doscher, "His disappointment is shared by many of us, including myself. His decision to leave was not an easy one."

Lipscomb, who was raised a Baptist and became an Episcopalian as a teenager, is the latest in a series of bishops from the Episcopal Church and its related tributaries to join the Catholic Church.

This year three other bishops in the Episcopal Church announced their intention to convert.

The Episcopal Church U.S.A. has experienced a continual erosion of support from clergy and laity, particularly in recent years.

For the past thirty years many of them left over the issue of women’s ordination and liturgical reforms. Lately, the exodus has increased over the consecration of an openly homosexual priest, Gene Robinson, as a bishop and the issue of same sex marriages.

Bishop Lipscomb did not respond on Wednesday to a request for additional comments on his decision.

In joining the Catholic Church, there is no indication whether he will seek the priesthood through the “Pastoral Provision,” initiated by Pope John Paul II.