Authorities: Priest who stole from parish should serve jail time 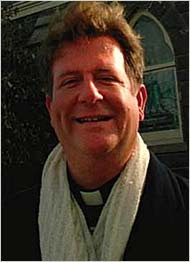 A Darien priest who stole hundreds of thousands of dollars from his parish to support a luxurious lifestyle should be sent to prison for about four years, prosecutors said, arguing that such crimes hurt charitable giving.

Authorities say Fay set up secret bank accounts to pay for a life of luxury, including traveling around the world and buying a condominium.

Prosecutors said Fay stole more than $1 million over seven years, but the priest admitted to taking between $400,000 and $1 million.

"The sentence in this case must reflect the seriousness of the offense committed by Fay, and provide a message of deterrence to all leaders who work with religious institutions or charitable organizations," prosecutors wrote in court papers filed Monday.

"When religious leaders cannot be trusted to handle church funds, the entire concept of giving money to religious organizations suffers."

Investigators working for the Roman Catholic Diocese of Bridgeport last year said Fay used church money for limousines, stays at top hotels around the world, jewelry and clothing from Italy.

Fay shopped at Bergdorf Goodman, Saks Fifth Avenue and Nordstrom, drove a Jaguar, attended a sports club, bought jewelry from Cartier, spent $130,000 for limo rides for himself and his mother, and stayed at hotels such as the Ritz Carlton, Hotel De Paris and the Four Seasons Hotel, the church report found.

A telephone message was left Tuesday for his attorney, who has not yet filed a sentencing memorandum.

Prosecutors rejected anticipated arguments that Fay's sentence should be reduced because he has prostate cancer, saying he failed to show that his illness cannot be treated in prison.