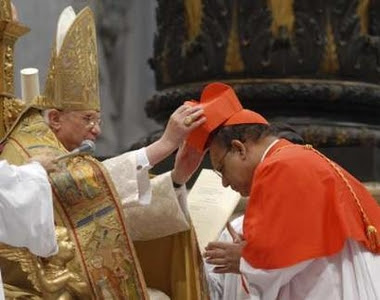 “India is a great country and there is great hope in” it, Benedict XVI told Card Oswald Gracias, archbishop of Mumbai, during the ceremony that made him a cardinal.

The newly-appointed prelate said he was very emotional when the “Holy Father actually put the biretta on you.” But “I realised there that I was now called to take on a new role for India, Asia and for the World.”

Benedict XVI called upon the cardinals “to act with fortitude to the extent of spilling your blood.” For the cardinal, “this means telling the story of Jesus, first of all by bearing witness with our own lives. In this sense, fortitude means acting in the spirit of Christ to create a new world system based on love and mutual trust. This is especially true for India, a nation characterised by a rich religious and cultural diversity which beckons us to work together and enrich one another.”

In light of the upcoming release of the next papal encyclical on hope, Cardinal Gracias made reference to it, saying that it is “quite clear how much India needs hope. The country has a rich heritage but also a tremendous future. We are making great progress in the economic, technological and educational fields. We have become a world power and need to be united.”

The country must “be conscious of the great hope God gave us. There is pain, intolerance and violence, corruption and hunger, but we must maintain the hope that we can change things, see India become a compass for Asia and the world. I have always known that our country was a land of hope and hearing it said from the Holy Father was moving.”

Before the end of his meeting with the pope, Cardinal Gracias invited him to visit India. “He looked at me and smiled without saying yes or no. Afterwards he greeted me and again gave his blessing for the whole country.”