Greetings augur well for the future 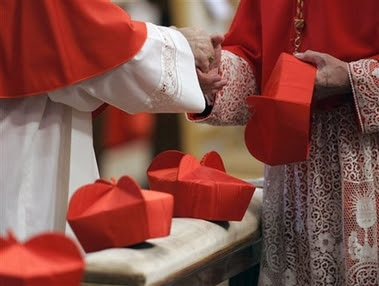 Irish eyes were truly smiling at the weekend when Catholic Primate Sean Brady was elevated to the College of Cardinals by Pope Benedict XVI in Rome.

The warmth of the ceremonies and the range of public representatives from Ireland north and south augured well for the new Cardinal's tenure of office.

Significantly, on the day of his elevation he received a glowing tribute from his Church of Ireland counterpart, Archbishop Alan Harper, who underlined the pleasure and joy the new appointment had given to other church leaders and members of their denominations.

In turn, Cardinal Brady acknowledged those sentiments in his first address after his elevation and, in a statement probably unprecedented in Irish Catholic Church history, he also acknowledged the good wishes conveyed to him by individual members of the Loyal Orders.

It was also most significant that one of the representatives from the Assembly was the Deputy First Minister Martin McGuinness, a leading member of Sinn Fein.

This underlies how far things have moved on since 1979 when Pope John Paul II on his "bended knees" outside Drogheda begged in vain for the Irish republican movement to end its violence.

All sides have travelled a long hard road since then, but the new Cardinal Brady rightly acknowledged that "we are in a new place, an era of great promise right now".

Cardinal Brady himself has travelled a long road since his boyhood days in Co Cavan, and his qualities as a quiet but firm leader and his service to the Catholic Church both at home and in Rome, where he was Vice-Rector and Rector of the irish College, have brought him deservedly his Cardinal's hat and ring, and also his titular church of St Cyricus and Julietta in Rome, which is thought to contain the tombs of the contemporaries of his grand-uncle, the former Fr Bernard Brady, of Belturbet.