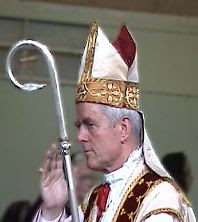 Bishop Richard Williamson, seemingly the most outspoken and controversial bishop of the Society of St. Pius X, asserted in a recent talk that the September 11, 2001 terrorist attacks were committed "to get the American public to accept the invasions of Afghanistan and Iraq," according to a news item by Jack Kenny in the Nov. 15, 2007 issue of The Wanderer.

Bishop Williamson, whose talk was held Nov. 4, 2007 in Bedford, Mass., is quoted as saying:"Without 9-11, it would have been impossible to attack in Afghanistan or Iraq. The forces inside the United States government and driving the United States government absolutely wanted to attack and destroy Iraq. The destruction wrought upon Iraq is unspeakable. And now the same forces want to do the same thing to Iran . . . They may well be plotting another 9-11."

The news item continues: "Heat from the burning fuel of the planes that flew into the twin towers of the World Trade Center could not have melted the 47 steel columns in each tower, causing them to collapse, he claimed. And a commercial airliner could not have penetrated six of the ten walls that were breached by 'whatever hit the Pentagon,' he said.

"What did hit the Pentagon, according to Bishop Williamson?"

I read your page, you got a nice product. Thanks for the information on the Dogmatic Topic of Intercommunion. I studied at an Orthodox-Anglican Monastery in Greece for some time before going to graduate school at Oxford, so I got a special place in my heart for Eastern Monasticism with a little Latin touch, of course! However, now I am a High Anglican Bishop (we celebrate a Tridentine Style Liturgy), who has valid lines from the Orthodox Churches. I am very moved by your page, and I recently got the book a certain Deacon Br. Andre Marie (from the Brazilian-Bishop Costa Old Catholic Lineage directing the St. Benedict Center of NH) mentioned (thanks for the referral) a very Hot! Roman Catholic Theology Book, that is troubling my current position called "Communicatio in Sacris: The Roman Catholic Church against Intercommunion with non-Catholics."

I am thinking of converting over to the Traditional Latin Roman Catholic Church (maybe help Wizard-Scholars Bishop Jason Spadafore and Bros. Michael and Peter Dimond?) and now I am in negotiations with a Bishop in France (a personal friend of Bishop Richard Williamson of the SSPX, and who I heard got the book and maybe leaving the "Una Cum" SSPX to join the Reverend Anthony Cekada?) who gave this book of Dr. DeTucci "Two thumbs up!" I must confess I am very close to joining Prime Minister Tony Blair in his voyage from Anglicanism to Roman Catholicism (who I actually met once at the Canterbury Abbey of St. Augustine in England):

I personally give Dr. DeTucci TWO THUMBS WAY UP for his Patristic and Dogmatic Scholarship! Indifferentism is a Major Problem, and it has caused the Mass Murder and Holocaust of Abortion today, sadly to say.

I would love to review any Mainstream Periodical (e.g. Bishop Timothy Henneberry's Moral Theology Magazine "Our Lady of Sorrows") that has read through DeTucci's Book, but I may write my own yet. I love to read first more established Scholars, you seem to be a top notch scholarly periodical online. Any degrees? I studied at Oxford, and thank God, I realized the Main Anglican Succession is invalid. That's why I had communion with the Eastern Orthodox Church, but I am rethinking my Economy of Sacramental Grace thanks to Doctor DeTucci (who I heard studied at the Lateran in Rome).

Sincerely in Christ Our Lord,

P.S. Doctor-Master (are you Irish?), I meant to ask you, if you had any Communication with the so-called "Latin Tridentine Church" headed by Bishop Michael Cox in Ireland? I had the pleasure of meeting the famous Hollywood Personality, that is, the priestess-Bishop Sinead O'Connor (better known as the Hollywood Pop Singer from Ireland):

She celebrates an Intercommunion Service of the Latin Tridentine Mass, and I am not sure if Bishop Clarence Kelly, the Scholar-Bishop of Oyster Bay, New York, has written a review of her lineage? I heard she comes from the controversial lineage of the late Archbishop Ngo Dinh Thuc of Vietnam (the same line that Bishops Daniel Dolan and Donald Sanborn claim their fame to). Any insights?

Is Williamson certifiable? He is certainly a heretic for not accepting Vatican II.

Is Bishop (?) Vitus an Episcopus Vagans? I have tried hard to trace him. From where did he obtain his degrees?