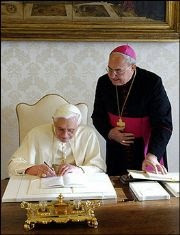 The new encyclical, a reflection on the theological virtue of hope, will be formally introduced to the media at a Friday news conference by Cardinal Georges Cottier, the former theologian of the pontifical household; and Cardinal Albert Vanhoye, SJ, the former rector of the Pontifical Biblical Institute.

The subject matter of the Pope's new encyclical, and the timing of its release, have been a subject of intensive speculation since July, when the papal spokesman, Father Federico Lombardi, disclosed that the Holy Father had spent a part of his summer vacation drafting a new document.

Earlier this autumn, Italian press reports had indicated that the Pope was writing on Catholic social teaching. Vatican sources now indicate that another papal document on that subject is still forthcoming.