At least that's what we'll be hearing soon since the Pope is against dropping nukes on toddlers and women and other innocents in Iran. They even think it's okay to speak of Iranians as if they were humans.

And they suggest diplomacy as an alternative to nuclear holocaust. The Pope hates us because we're free.

1. The Vatican is part of "Old Europe"

2. Benedict was a Hitler Youth as a child

3. Weren't some French people popes once?

4. We heard that Benedict was once a Hitler youth

7. Did we mention that the Pope was once a hitler youth?!?

It's certainly been done before: 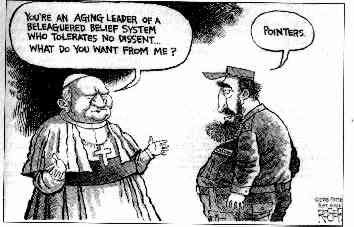