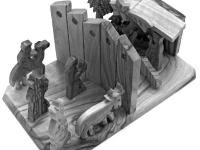 A UK based Christian charity today has launched a new version of the Christmas nativity scene with a difference.

The traditional nativity set has been updated by the Amos Trust with a modern day touch by including the Israeli Separation wall.

This traditional olive wood nativity scene, made by local craftsmen in Bethlehem, now includes the Israeli Separation wall, which surrounds the little town.

Today the wise men would not be able to make it into Bethlehem, the Amos Trust points out, as they would be turned away at the security gate and refused an entry permit.

Part of the trust's work is with partner projects in Gaza, on the West Bank in Bethlehem, and in Israel where it works closely with Jewish, Muslim and Christian peacemakers.

Canon Garth Hewitt, director of Amos Trust and guild vicar of All Hallows on the Wall, London said: "Most people don't realise how cut off Bethlehem is now and how difficult life is for the people living there. We are selling these nativity scenes in the hope that people will give a thought to those living in the little town this Christmas."

I have seen that ghastly wall; it is an unspeakable outrage. And the Israelis have built it on Palestinian land. Any number of websites will tell you about it, but to see it in reality is horrendous. To live alongside it, overwhelmed by it, is to violate human living. These activities of oppression are destroying the soul/integrity of the Israelis.