May God bring peace to Israelis and Palestinians in Annapolis, says Pope 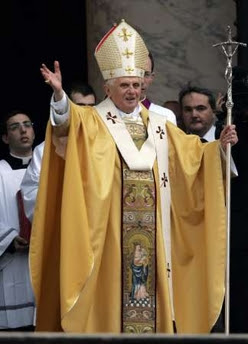 Let us pray so that God may bring peace to Israelis and Palestinians and “the gift of wisdom to all the participants” when they meet for the Israeli-Palestinian peace conference in Annapolis.

The Pope invited the new cardinals with whom he celebrated the solemn mass this morning in St Peter’s Basilica to join the day of prayer organised for today by the bishops of the United States.

He did the same with all the faithful gathered for today’s Angelus so that they may join the event as well.

“Next Tuesday in Annapolis, in the United States, Israelis and Palestinians with the help of the international community will try to re-launch the negotiating process in order to find a just and lasting solution to the conflict that has brought bloodshed to the Holy Land and tears and suffering to the two peoples,” the Pope said.

“I call upon you to join the day of prayer organised for today by the Bishops’ Conference of the United States in order to beseech God’s Spirit to grant peace to this region so dear to us and give wisdom and courage to all participants in this important meeting.”

The prayer for peace and Christian unity are the “first and main mission” for the new cardinals as it is for the entire Church both of which are called to be in its service. This was the central concept on which Benedict XVI based the homily he delivered during the holy mass he celebrated in St Peter’s Basilica with the 23 new cardinals he appointed yesterday. The latter were surrounded by more than a hundred cardinals, hundreds of bishops, priests and faithful, mostly from the new cardinals’ dioceses.

The Pope reminded the cardinals that the “throne” that was raised is that of the Cross and the “entire hierarchy of the Church, each charisma and ministry, everything and everyone are in the service of His Lordship.”

In a basilica draped in flowers, the Pope gave each new cardinal the last symbol of his office, i.e. the cardinalitial ring. The ceremony was both festive and suggestive, ending in a dinner held in the foyer of the Paul VI Hall with both Benedict XVI and the cardinals in attendance.

To those who now belong to the Church’s “Senate,” the Pope talked about the crucifixion that is represented on their ring.

“This for you, dear new Brother Cardinals, will always be a reminder of the King you serve,” he said, “on what throne He has been elevated and how faithful he has been till the end when he defeated sin and death with the strength of divine mercy. Mother Church, Christ’s bride, gives you this insignia as a memento of Her Husband as Christ loved the church and handed Himself over for her (cf Eph 5:25). Thus, wearing the cardinalitial ring, you shall constantly be reminded to give your life to the Church.”

Taking his cue from today’s liturgical feast of Christ the King and from the “Christological hymn from the Epistle to the Colossians,” the Pontiff said that “this text of the Apostle expresses a synthesis of truth and faith that is so powerful that we cannot but admire it deeply. The Church is the repository of Christ’s mystery. It is so with humility and no trace of pride or arrogance because it is the highest gift that it was given, with no merit in getting it, but which it is called to offer freely to humanity in every age as a horizon of meaning and salvation. It is not philosophy, nor gnosis, even though it includes wisdom and knowledge. It is the mystery of Christ, Christ Himself, Logos incarnate, who died and has risen, becoming the King of the universe. How not to feel a wave of enthusiasm filled with gratitude to be allowed to contemplate the splendour of this revelation? How at the same time can we not feel the joy and sense of responsibility to serve this King, bear witness with one’s life and words to His Lordship? This, in particular, is our task, my venerated Brother Cardinals, namely to announce to the world Christ’s truth, hope for every man and for the entire human family.”

“In the wake of the Second Vatican Ecumenical Council, my venerated Predecessors and Servants of God Paul VI, John Paul I and John Paul II were true heralds Christ’s regality in today’s world. And it is for me a motive of consolation to always count on you, collegially and individually, in order to accomplish that fundamental task which is the Petrine ministry. In conclusion, closely united to this mission,” said the Pope, “is an aspect that I would like to touch upon and entrust to your prayers: peace among all of Christ’s disciples as a token of the peace that Jesus came to establish in the world.”
+++++++++++++++++++++++++++++++++++++++++++++++++++
Disclaimer