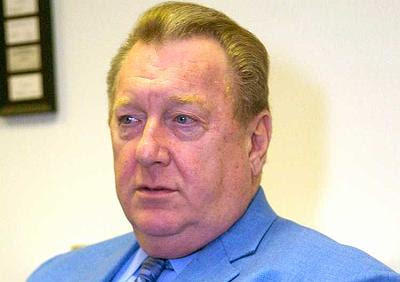 The criminal case is over, and the embarrassment that the Rev. Mark Sorvillo brought to St. Margaret Mary Catholic Church is in the past.

But a cloud follows Jim Brockhagen.

Brockhagen was business manager at St. Margaret Mary -- the Northwest Side parish Sorvillo was convicted of stealing thousands of dollars from.

In that role, Brockhagen was responsible for overseeing financial records.

Sorvillo, it later emerged, was spending lavishly on himself and a male stripper he met at a gay club.

Brockhagen was never charged with any wrongdoing and never officially implicated as being involved in Sorvillo's years-long scam. Yet the cloud hangs over him, through a skeptical glance or quiet whispers around the neighborhood, Brockhagen and parishioners say.

He had to know something, they speculate. How could he not have known?

In fact, Brockhagen says, he did know about Sorvillo's spending habits -- and brought them to the attention of the archdiocese multiple times. Each time, he claims, archdiocese officials asked him to remain quiet.

But now that Brockhagen has been fired -- and filed a retaliatory discharge lawsuit against church leaders -- he says he feels more free to talk about what he knew and when he knew it.

Brockhagen's attorney, Luke Casson, said they made him a scapegoat for their own lack of oversight.

Brockhagen, whose family was raised in both St. Margaret Mary and neighboring St. Jerome parishes, was hired by St. Jerome to be its $40,000-a-year financial manager in 2002.

Not long afterward, he said, Sorvillo and the Rev. Tom Bradley from St. Jerome arranged for Brockhagen to manage the books at St. Margaret Mary for an extra $10,000 a year.

It didn't take long, Brockhagen said, before he noticed the odd charges to St. Margaret Mary accounts and a drastic drop in Sunday collections.

Sorvillo tried explaining it away, but Brockhagen took the matter to archdiocese officials.

As a criminal probe began, church leaders told him to stay away.

He focused on St. Jerome and says he began noticing "suspicious video rentals" and "financial irregularities" in the spending of a priest there, the Rev. Jeremy Thomas. Thomas has not otherwise been accused of any wrongdoing.

By late 2005, Brockhagen said, Thomas claimed to be unaware of the St. Jerome-St. Margaret Mary arrangement and fired him for "overpaying" himself. Thomas declined to comment and referred calls to the archdiocese.

The pain of losing his job was bad enough, Brockhagen said. But the doubt that lingers over him -- and the accusations they imply -- led him to file suit.