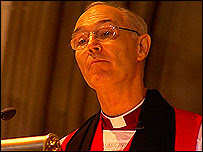 The Church of Ireland Primate Archbishop Alan Harper has praised the " good judgment" of Pope Benedict XVI in elevating the Catholic Primate of all-Ireland, Archbishop Sean Brady, to the College of Cardinals.

He said that the appointment had given the "very greatest joy and satisfaction"."We in Armagh know well the quality of the Archbishop's ministry, and the respect and affection in which he is held throughout the community. Those of us from other denominations, who are privileged to work closely with him, know that we have a colleague of generosity, warmth and true spiritual depth."

Archbishop Harper said that Dr Brady was a person whom people could trust and respect.He added; "He is an admirable colleague, a kind friend, a good man and a faithful servant of the Lord, whom we all seek to serve and to follow. I salute Pope Benedict's good judgment, and I share in the pleasure that Archbishop Sean's preferment has brought to so many."

The breadth of welcome for Cardinal Brady's appointment across the spectrum is an indication of the respect in which he is held by all the main Protestant churches.

The news of his appointment was also welcomed earlier by the Presbyterian Moderator, the Rt Rev Dr John Finlay, and the Methodist President, the Rev Roy Cooper.

The Catholic Primate, who has been Archbishop of Armagh, for the past 12 years, worked closely with the former Church of Ireland Primate, Archbishop Robin Eames, and other church leaders.