Despite being left at the mercy of terrorists, Christians continue to hope, says bishop of Mosul 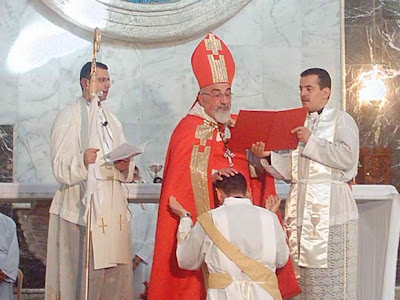 Mgr Faraj Raho, Chaldean bishop of Mosul, spoke to AsiaNews about the endless suffering Christians in northern Iraq are enduring.

He talked about a city left to fend for itself, easy quarry for terrorism, and an international plan to keep Iraq divided, ignorant and weak.

Unlike Iraq’s capital, where the number of attacks has substantially dropped with refugees starting to make their way home according to government sources, Mosul is still in the grip of violence.

Here is an interview Monsignor Raho gave during his recent stay in Rome. He was a member of the delegation that accompanied the Chaldean Patriarch of Baghdad Emmanuel III Delly, who became a cardinal during the Consistory of November 24.

Your Excellency, can you update the situation in Mosul? Over the week-end a news report mentioned a car bomb against a police patrol that killed nine people . . . .

Unlike Baghdad the situation in Mosul is not improving. It is apparent that US-led coalition forces have begun “cleaning up” the country in the south where the influence of Iran and Syria is strongest: Basra, Ramadi, Baquba and Baghdad.

As the US moves up so do the terrorists who are now concentrated in Mosul. This way the US is sure that they cannot go any further unless they want to clash with the Kurds, who are Washington’s allies. But this begs the question.

Can anyone clean up Mosul? At present, there seems to be no plan to normalise the situation in the city, which has been left to fend for itself.

In this context how does the existence of the Church and the Christian community continue?

We, Christians of Mesopotamia, are used to religious persecution and pressures by those in power. After Constantine, persecution ended only for Western Christians, whereas in the East threats continued. Even today we continue to be a Church of martyrs. When we recite vesper prayers we have a special hymn for the martyrs.

In Mosul religious persecution is more noticeable than elsewhere because the city is split along religious lines.

Unlike Kirkuk where divisions are ethnic with Kurds, Turkmen and Arabs vying for Christian support, the division between Muslims and Christians is sharper in Mosul.

Of course, everyone is suffering from this war irrespective of religious affiliation, but in Mosul Christians face starker choices. Short of fleeing they can choose between converting to Islam, paying the jizya (poll tax imposed on non-Muslim subjects) or death.

Terrorists are behind intimidations and actions designed to achieve any of these three outcomes but so are common criminals who use Islam to get rich. In the meantime only one Christian in three is left in the city.

Who has an interest in emptying the city of its Christian inhabitants?

It is clear that such a plan does not target Christians alone, but the intelligentsia and the professional class as well, Muslims included.

However, if Christians are only 3 per cent of the city’s total population they represent 35 per cent of those with a higher education.

Forcing these people to leave means preventing the country from rising again. It means fuelling ignorance which is a support for terrorism.

Such a plan is under way elsewhere in the country.

Attacks target doctors, lawyers, professors, journalists. The plan is the brainchild of those who run international politics and Iraq’s neighbours. No one wants a free and independent Iraq because it would be too strong.

Together we would constitute a great intellectual and economic power. By keeping the country weak and divided, it is easier to dominate it.

You mentioned a Church of martyrs when referring to the Iraqi Church . . . this year your diocese had one martyr, Fr Ragheed Gani. What legacy does his sacrifice have?

For Mosul Christians Ragheed’s martyrdom was a reason to stay put in Iraq. Those who were weaker in their faith came out stronger.

The Thursday of his death (2 June) was Corpus Domini. I celebrated mass in Holy Spirit Parish Church to send a signal that we must have courage and keep on going.

When they attacked the Bishops’ Residence (7 December 2004), we celebrated mass among the rubble. Ragheed personally saw many attacks.

Each time one took place he went there to show the community that despite everything we had to start all over again. Our people does not get discouraged easily and these attacks end up strengthening its resolve.

Christmas is upon us. How will Mosul Christians celebrate it?

Let me say that unlike Baghdad no church was forced to shut down in Mosul. Curfew does prevent late evening and early morning mass.

And on Christmas Day we shall conform to the allowed timetable but it is the safest time anyway.

The faithful used to come on their own; now for many meetings and celebrations we organise our own transportation. We’ll do the same on Christmas as well.

In various areas we have minibuses driving kids to their respective parish churches for catechism, mass or choir rehearsals. Our drivers are trustworthy individuals.

Adult theology courses in Tel Kaif and Karamles rely on our transportation, too.

For people the Church continues to be a meeting place, a source of support, especially for refugees from the rest of the country who found shelter in the villages in the Nineveh Plain near Mosul.