The tradition of the Syriac Churches, an instrument of dialogue with Islam 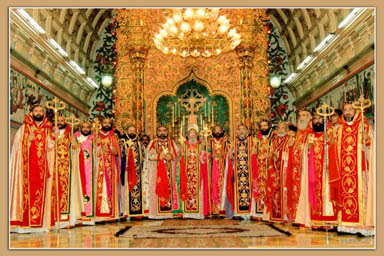 Benefactors of a centuries old tradition in co-existence alongside Muslims, the ancient Syriac Churches have an important role to play today regarding dialogue, Christian witness and cooperation.

That was the conclusion drawn from a conference which took place between November 14 and 16 in Salzburg Austria organised by Pro Oriente, a foundation of the Vienna Archdiocese which gave birth to Pro Oriente Forum Syriacum in October 2006.

It gathers together academics from the Syriac Churches with an aim to promoting its legacy and work towards improving understanding, cultural enrichment and solidarity.

“Syriac Churches Encountering Islam: Past Experiences and Future Perspectives“, was the theme of the first academic encounter, which involved scholars from Iraq, Syria, United Sates,

Austria, Germany, Holland, Italy, India and France. The conclusions drawn are based on the affirmation that from the very beginning Islam entered into close contact with Christianity of the Syro-Aramaic tradition.

The early Umayyad period is marked by an open and tolerant attitude towards Christians.

One of the main reasons might have been that the Muslims needed their administrative and economic knowledge and experience to rule and organize the newly conquered territories (for instance St John damascene and his father).

In the attitude of Muslims towards Christians, very soon one can realize certain ambivalence according to the social and political circumstances: At times more open and tolerant, at times more aggressive and even oppressive.

This ambivalence is easily justified by different Koranic verses. Texts concerning Islam written in Syriac (about 20) were mainly for internal use in Christian communities in order to educate and strengthen them in their own faith and to help them respond to certain questions and objections raised by Muslims.

Those written in Arabic were approaches to present Christian dogmas and moral to Muslims. Some of them are of an apologetic nature, and others are clearly polemical.

The Abbasid period inaugurates a time of wide and fertile cultural exchange as a consequence of the spread of the Arabic language. Commissioned by the caliphs (bayt al-hikma-house of wisdom), mainly Christians of the Syriac tradition undertook huge systematic translations - especially in the fields of Science, Philosophy, and Medicine - from Greek via Syriac into Arabic.

In this way the knowledge of the Greco-Roman world was made available as one of the foundation for the development of the Arabo-Islamic culture. Through the Arabic presence in Spain this heritage was transmitted to the European Christian Middle Ages.

In the 12th and 13th centuries, after having contributed to the development of the Arabic culture, Christians and Muslims lived in a common cultural world of which they shared the values and achievements.

For instance, the most famous West-Syriac scholar of the time, Bar Hebraeus, was capable of distinguishing between Islam as a set of believes, and as a cultural and spiritual tradition.

For the Ottoman period the focus of the papers and discussion was the application of the Millet-system as a new concept defining the status of non-Muslim religious communities.

The Millet-system had a very profound impact on the identity of the various Christian communities. It left lasting marks on the minds of the people and even on institutions.

Many problems which Christians face today in the Islamic world cannot be understood if one does not take into account the experience of the Millet-system, which has survived in one or other way in modern states with a Muslim majority.

The Indian experience of Islam on the Malabar Coast contributed to a broader understanding of Christian-Muslim coexistence. It also illustrated that the western colonial interferences often destroyed traditional patterns of living together.

For the important issue of the relations between Christians and Muslims in our times, it is worthwhile to take into account the experience of the past and the present of the Syriac communities, who were capable of developing a form of encounter with their Muslim neighbours in the field of dialogue, Christian witness, coexistence and cooperation.

It is hoped that this endeavour may help the Syriac Christians to better preserve and fructify their rich heritage and offer their unique contribution to the search for Christian unity and to the building of a better and more fraternal with their Muslims neighbours.

The following academics and scholars took part in the conference: