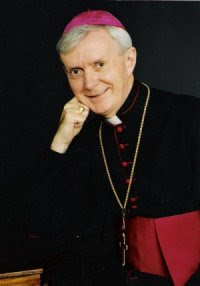 The bishop of Killala, Dr John Fleming, has said he acknowledges fears of residents in north Mayo about the controversial Corrib Gas pipeline controversy and called for both sides in the row to show each other tolerance, courtesy and respect.

In a letter to the Mayo News, the bishop said he was not competent to make a scientific judgement on the safety or otherwise of the Corrib gas project, but added that he recognised that many people living in the area “have genuine fears about the project”.

He said he had consistently urged that these fears be respected and while the decision of the Environmenal Protection Agency to approve an operating licence for the controversial refinery would allay many of these fears, “it may not remove all of them”.

“The route of this pipeline, therefore, should be as far removed from family homes as possible and, in particular, every effort must be made to ensure that Carrowmore lake will be permanently free from pollution,” he said.

He said he recognised there were also people in the area who supported the project and this was “their right and it must be respected”.

Equally, Dr Fleming’s letter went on, there were others, such as the supporters of the Shell to Sea campaign, who do not and ”they also have a right to make their views known and to protest in a peaceful lawful manner”.

The bishop said he urged all concerned that the project be examined “with an open mind, with mutual respect, courtesy and tolerance all round”.

“In particular I ask those who will make the final decisions to take account of the fears expresed the opinions voiced and the longterm welfare of the entire community in Erris,” he remarked.

In the previous week’s issue of the newspaper, Mary Corduff of Shell to Sea called on Bishop Fleming to ‘represent all his flock’, and speak out on the issue.

Three north Mayo priests recently wrote to Minister for Energy Eamon Ryan asking him to respond to “the genuine concerns” of their parishioners over pipeline and refinery plans.

Fathers Seán Noone, Michael Gilroy and Michael Nallen said that the majority of the people of their Kilcommon parish did not consent to the project and called on the minister to address the concerns of those whose lives and futures are at the centre of the negative impact and potential risks of the Corrib gas project.

“The project as planned does not have the consent of the people of Ballinaboy,” they told Mr Ryan.