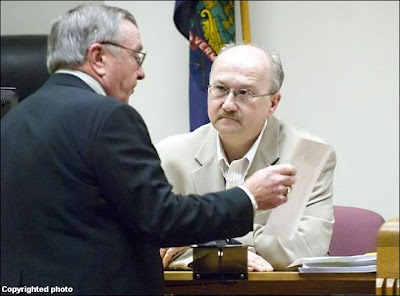 James Turner (right) is cross-examined Wednesday by diocesan attorney David Cleary on the third day of the second trial in Turner's lawsuit against the Roman Catholic Diocese of Burlington.

James Turner sat on the same witness stand and told the same story alleging how a Vermont priest sexually abused him as a teenager 30 years ago.

But unlike the first time Turner testified last June, Wednesday didn't end in a mistrial.

Instead, the 47-year-old Northeast Kingdom native told a new judge and jury about his claim that the former Rev. Alfred Willis — a priest in Burlington, Montpelier and Milton before being defrocked in 1985 — performed oral sex on him when he was 16, and why he's holding the statewide Roman Catholic Diocese responsible in a civil lawsuit in Chittenden Superior Court.

"I was taught that a priest was God's representative on Earth," Turner said. "You were taught you could trust a priest."

Turner's lawsuit, originally billed as the first priest misconduct case in years to reach a Vermont jury, now is said by the national Survivors Network of those Abused by Priests to be the first in the country to go to retrial.

Turner, a resident of Virginia Beach, Va., was testifying on the fourth day of the original trial June 25 when a church lawyer asked him a question banned under a pretrial order. As a result, Judge Ben Joseph declared a mistrial and ordered the diocese to pay the plaintiff $112,450 in legal costs.

Judge Matthew Katz has taken over the case, which 10 women and four men (in a 12-member jury with two alternates) are hearing this week.

On Wednesday, diocesan lawyer David Cleary treaded close to the same subject that caused the mistrial — specifically, a court ban against talk of a sexual affair between Willis and Turner's older brother, a fellow priest.

The judge replied: "I thought we're not going there."

But Cleary continued: "Do you believe your brother had respect for Father Willis?"

The judge replied: "I don't really see the relevance of this."

That exchange came after Turner recalled the night he alleges Willis performed oral sex on him in June 1977. The two, Turner said, were staying in a roomful of family and friends at the Latham, N.Y., Holiday Inn after his older brother became a Catholic deacon earlier that day.

"First I was woken up out of a sound sleep. Then I couldn't comprehend what was going on. I was shocked, surprised. I couldn't believe this was happening to me."

Turner also remembered the next morning.

"I felt dirty, absolutely filthy. I took what seemed to be a long, long shower. I could not wash that off."

One of Turner's lawyers, John Evers, asked why he didn't tell anyone at the time.

"My thought was who would believe me? I'm a kid. He was the almighty, so to speak."

Turner said he next saw Willis several months later at the end of 1977, when the priest woke and tried to abuse him again while staying at the teenager's home in Derby.

"I told him to stop. He told me enjoy it. At that point I got angry. I pushed him against the wall. I was going to punch him, but I stopped because I didn't want to cause a commotion and wake up my parents."

Evers again asked why he didn't tell anyone.

"How was I going to explain this?"

Turner said the priest later gave him a sweatshirt and basketball.

Evers asked what happened to the sweatshirt.

"I never wore it," Turner said.

Evers asked what happened to the basketball.

But later Wednesday, Cleary presented a past court deposition in which Turner said he didn't destroy Willis' gift basketball but instead gave it to someone else.

Said Cleary: "Is truth different from time to time for you? Which is the truth?"

Replied Turner, who said he was undergoing mental health therapy: "I remember things more now than I did back then."

Said Cleary: "To what extent did your memory improve because you're in a lawsuit?"

Replied Turner: "None of it."

Turner said he grew up to have two failed marriages and a stormy relationship with a woman addicted to drugs. Then, in 2002, he read headlines about a priest misconduct scandal in Boston.

"The more I read about that whole thing in Massachusetts, the more I was remembering what happened to me in 1977. I started to have nightmares, high anxiety. My life was going into a spiral. I wanted to get off this merry-go-round. I was just wondering if there was a thread through this whole thing."

In 2004, Turner read news that the diocese paid $150,000 to another accuser and admitted it knew Willis had a problematic history as early as seminary yet transferred him repeatedly without telling churchgoers of his past. That's when Turner reported his allegations to the diocese and later filed a lawsuit.

Willis, now 63 and living in Leesburg, Va., has denied the charges but has settled with Turner for an undisclosed "minimal amount," lawyers say.

The judge, for his part, ended Wednesday by, after dismissing the jury, questioning whether the plaintiff had enough of a case to ask the diocese for punitive as well as simple compensatory damages.

"I've got a lot of question marks," Katz told Turner's attorneys, who haven't yet asked the jury for a specific financial amount but will be able to argue their case to the judge Thursday.