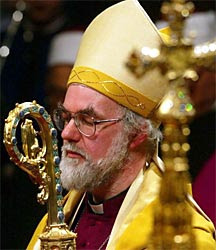 Archbishop of Canterbury Dr Rowan Williams has found himself at the centre of an unexpected row, following cautious remarks to a Muslim magazine, after a Sunday newspaper construed it as an all-out attack on the US and the BBC gave neocon hard-liner John Bolton free rein to attack him this morning.

Emel magazine courteously described the interview (which can be read here, via Abul Taher and The Times) as "a series of profound views expressed in serene tranquillity".

In the course of his remarks, Dr Williams declared that the US had lost the moral high ground since the 9/11 attacks, and that Washington's attempts to accumulate influence and control in the region were not working.

He commented: "It is one thing to take over a territory and then pour energy and resources into administering it and normalising it. Rightly or wrongly, that's what the British empire did - in India, for example. It is another thing to go in on the assumption that a quick burst of violent action will somehow clear the decks and that you can move on and other people will put things back together - Iraq, for example."

The archbishop called for the US to institute "a generous and intelligent programme of aid directed to the societies that have been ravaged, a check on the economic exploitation of defeated territories and a demilitarisation of their presence. All these things would help."

The Sunday Times chose to interpret the interview as an assualt on the United States as the "worst" imperialist nation, an accusation not made in the interview.

Meanwhile, John Bolton, a former US ambassador known for his extreme neocon views, launched a vitriolic attack on the archbishop and all critics of the US-led war on the BBC Radio 4 Today programme.

He called Dr Williams' comments "incoherent", said that there "was a good reason that the Anglican church does not declare its leaders infallible" and invited the archbishop to "concentrate on his day job".

Mr Bolton had been given the opportunity to plug his new book on Iraq and related issues. Unchallenged by any opposing viewpoint, he called for the selective bombing of Iran over the nuclear installations row.

Commenting in The Guardian this morning, former religious affairs correspondent Stephen Bates noted: "Not for the first time, the archbishop found his words construed as a new critique of American policy, even though he has been a consistent and outspoken critic of the invasion of Iraq since his inception."

Bates writes: "[Williams'] remarks elsewhere in the interview about the place of religion in society, the development of relationships between Christian and Muslim communities in Britain and the claim that some Muslim political solutions are not always very impressive and might benefit from classical liberal democratic probing, were not reported."

The archbishop also criticised the use of violence as a political solution. He said it could too easily be "a quick discharge of frustration. It serves you. It does not serve the situation. Wherever people turn to violence what they do is temporarily release themselves from some sort of problem, but they help no one else. A lot of the pressure around the invasion of Iraq was 'we've got to do something, then we'll feel better.' That's very dangerous".