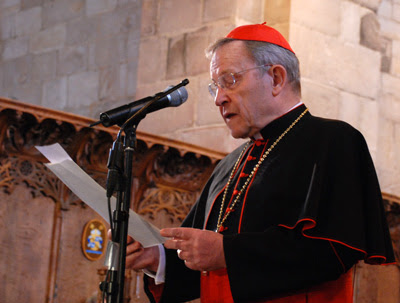 The Vatican’s top official on relations with non-Catholic Christians has called upon the Catholic Church to critically self-examine itself in response to the “exponential” rise of Pentecostal movements.

At a meeting of the world's Catholic cardinals, Cardinal Walter Kasper, who serves as president of the Pontifical Council for Promoting Christian Unity, said “self-critical examination of conscience” was necessary for the church body.

“We must not ask first what is wrong with the Pentecostals but ask what our pastoral failings are and come to a spiritual renewal," the ecumenical leader said Friday.

It is believed that the Catholic Church's views on divorce and its barring of re-married Catholics from receiving communion has caused many Catholics to switch over to evangelical and charismatic groups.

There are now 400 million evangelicals and charismatics worldwide.

Earlier in May, on a trip to Brazil, Pope Benedict XVI, much to the offense of some, described Pentecostal churches as “sects” and said that they used aggressive tactics to win souls.

In Brazil alone, Roman Catholics used to account for about 90 percent of the population in the 1960s; by 2005, it was down to 67 percent, the Associated Press noted.

The Vatican has been increasingly lamenting the rise of Protestant evangelical communities in Latin America, Africa and elsewhere, and the resulting flight of Catholics

Kaspar’s latest remarks were made on the eve before Saturday's ceremony to elevate 23 new cardinals, when the world's cardinals met in Rome to discuss church concerns at the request of the pope.

During the consistory, Kasper briefed the cardinals on relations with other Christians, focusing on the church's relations with the Orthodox, Protestants and Pentecostal movements.

Kasper said the rise of independent, often "aggressive" evangelical movements in Africa and elsewhere had complicated the church's ecumenical task. Nevertheless, the Vatican official told reporters that "ecumenism is not an option but an obligation."

Further into his remarks, Kasper spoke highly of the renewal of ties with the Orthodox Church.

Earlier this month, the Vatican released a joint declaration with the Orthodox Church in which Orthodox leaders recognized the Roman Catholic pope as the highest rank in the unified Church.
Although Russian Orthodox Patriarch of Moscow Alexis II, who represents around 250 million Orthodox Christians worldwide, did not sign the accord, Kasper remained optimistic, saying that a meeting between Alexis II and Benedict would help heal the rift.

Kasper also admitted that relations with Protestant churches were strained earlier this year by a Vatican document claiming that the Catholic Church was the “one true church of Christ.”

The cardinal said that the amount of criticism over the document was unjustified but conceded that the Catholic Church needed to be more careful in presenting such views.

Kasper said that the Catholic Church had to "give witness to the richness and beauty of our own faith in a positive and welcoming way,” rather than pointing out the weaknesses of other faiths.

the Vatican official told reporters that "ecumenism is not an option but an obligation."

There is a petition underway at www.onedate.org where Catholics Orthodox and Protestants can vote to Celebrate the Feast of Easter all in one date.