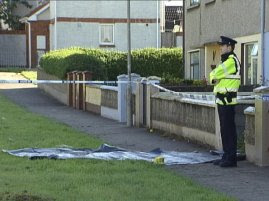 A PRIEST attempted yesterday to reach out to men of violence who continue to “crucify” the families of their victims.

He was speaking at the funeral mass of an innocent victim, Jeffrey Hannan. The 19-year-old was beaten to death early on Thursday last.

Fr Hogan said Mr Hannan, described locally as a fine young man, was the fourth person to die violently in the Southill parish within the past 12 months.

“There are many at this side of Limerick city and across the city who carry deadly secrets,” the priest said.

“Secrets of those who have killed, carried out such acts of violence that resulted in Jeffrey’s death. Others are missing, never found — such as Richard ‘Happy’ Kelly and Matthew Carroll. There are people who know what happened to them. There is forgiveness for all, even those with such secrets,” said Fr Hogan.

“But not as long as you keep crucifying the innocent mourning mothers and families with your silence. Forgiveness comes at the price of being remorseful, open, just and courageous.”

Fr Hogan also hit out at the way some sections of the media reported Jeffrey Hannan’s murder claiming he “was known to gardaí”.

Fr Hogan said: “What a phrase. I imagine that those who use such a phrase are trying to pitch Jeffrey and others into another world — a world where such violent things happen, a world to which we do not belong and that will never touch us.”

"Mr Hannan was known as a young man who loved his family, was very genuine, loveable, caring, respectful and a person who would stop and talk to people. Like the rest of us he was also blessed with his private inner struggles and was remorseful.”