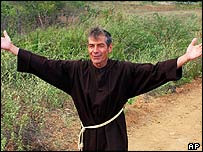 A Roman Catholic bishop who is on the second day of a hunger strike said Wednesday he was prepared to die unless the government stops work on controversial river diversion project.

The project would divert the Sao Francisco river, the nation's fourth largest, as part of plan to irrigate the country's arid northeast.

The government estimates the plan will benefit about 12 million people in the desperately poor region. Bishop Luiz Flavio Cappio and other opponents of the project say it will cause irreversible environmental damage and principally benefit large agribusiness interests and builders.

Cappio said in telephone interview from the small town of Sobradinho in Bahia state that he would not call off his hunger strike unless the government removed army engineers from the work sites and agreed to shelve the project.

"If it is necessary (I will die), I only ask God courage and strength if it comes to that," said Cappio, who is staging his strike at a church on the edge of a lake created by the Sobradinho dam.

Army engineers began preliminary work in June on the US$2 billion (€1.34 billion) project, which will be contracted out to private companies.

In 2005, Cappio ended a similar hunger strike after 11 days when the government promised to hold public debates on the project — and shortly after he was visited by an envoy from the Vatican.

He acknowledged Wednesday that the Vatican is not in favor of the current hunger strike.

"They have their opinion which is against this, but that won't interfere," he said.

President Luiz Inacio Lula da Silva said he did not plan to end work on the project.