It's joy as Njue is ordained Cardinal 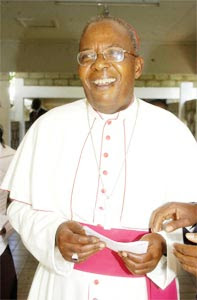 After waiting for close to five years since the death of Maurice Cardinal Otunga, another Kenyan, Nairobi Archbishop John Njue, was elevated to the college of the Cardinals yesterday.

Njue joined 22 other archbishops ordained by Pope Benedict VXI in a colourful ceremony at the St Peter’s Basilica in Rome.

During the ceremony that lasted one hour and a half, the Pope placed a red berretta on top of the red skull cap, which now replaces the purple one that every bishop in the catholic church puts on.

In addition, the Pope officially gave them the cardinal title.

In his homily to the more than 8,000 faithful inside the basilica and the another 30,000 seated outside following the proceedings from giant screens placed outside, the Pope congratulated the 23 new cardinals for being found worthy of the title and responsibility.

He called on them to defend the faith even if it would cost them their lives.

The pontiff went on to say that the ordination of the 23 new cardinals was as result of pastoral needs in the church in all the five continents that they represented.

The others were Theodore Adrien Sarr, the Archbishop of Dakar, Senegal, and Emmanuel Delly III, a patriach in Iraq.

The Pope paid great tribute to Delly and pledged his support to the people of Iraq in their moments of pain. He prayed for lasting peace in the country.

Njue, who was born in 1944 in Embu District was ordained priest in 1973 at St Peter’s Basilica where he returned yesterday, this time to be made a cardinal.

After being made the first bishop of Embu in 1996, Cardinal Njue worked in that capacity before he was transferred as a co-adjutor bishop of Nyeri in 2002, a post he held until he was named archbishop of Nairobi and installed on November 1, 2007.

Njue becomes the second cardinal in Kenya after Maurice Cardinal Otunga, who was made ordained in Rome by Pope Paul VI in 1973.

Immediately the ceremony was over, Kenyans waving the country’s flag broke into song and dance outside the basilica singing the new Cardinal’s favourite song, Ni Baraka kutoka kwa Mungu.

Today the new cardinals will be given their new rings by the Pope.