Pope calls Catholics to prayer and sacrifice during Lent 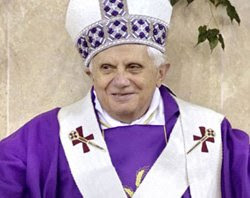 Pope Benedict began Lent by presiding over Mass at the Church of Saint Sabina and calling on Catholics to enter the period of conversion through frequent contact with the Word of God, more intense prayer and a penitential lifestyle.

Let these be “a stimulus to convert and to love our brothers and sisters, especially the poor and needy," he said.

Benedict XVI began yesterday’s Lenten observance with a penitential procession from the church of Sant'Anselmo on Rome's Aventine Hill to the nearby basilica of Santa Sabina where he presided at a Eucharistic celebration.

The Ash Wednesday ceremony included the Pope receiving ashes from Cardinal Jozef Tomko, titular of Santa Sabina, after which the Pope imposed ashes upon cardinals, bishops and a number of faithful.

In his homily the Pope highlighted that "the call to conversion emerges as the dominant theme" in the Ash Wednesday liturgy.

Recalling that the Church is celebrating the 2,000th anniversary of St. Paul’s birth, he pointed out that the Apostle was "aware of having been chosen as an example.”

Because of this awareness, "St. Paul recognized that everything in him was the work of divine grace, yet he did not forget the need to accept freely the gift of new life received at Baptism."

"How can we fulfill our baptismal vocation?" the Holy Father asked. "How can we emerge victorious from the battle between the flesh and the spirit, between good and evil, the battle that characterizes our lives? Today's Gospel reading shows us three useful means to this end: prayer, alms and fasting.

Ways to live out these three practices can be found in “the life and writings of St. Paul," the Pope said. The Apostle exhorts us to "persevere" in prayer, and to "pray without ceasing."

On the subject of almsgiving, he speaks of "the great collection in favor of our poor brethren" and underlines how "charity is the apex of a believer's life. ... He does not expressly mention fasting, but he often calls for sobriety as a characteristic of people called to live in vigilant expectation of the Lord," Benedict XVI explained.