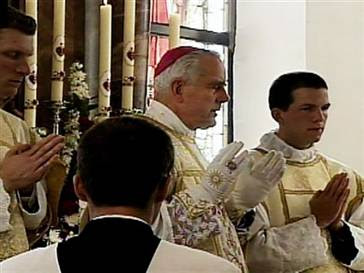 The Roman Catholic English bishop who denies the true extent of the Holocaust is expected to speak at a traditionalist church in north London in the near future, it has been learned.

Bishop Richard Williamson is understood to be considering giving a conference for traditionalist Catholics in the church hall at St Joseph and St Padarn, a Tridentine Rite church in Holloway, north London.

In an address there last summer he praised the Pope’s recent encyclical Quanta Cura, a considered analysis of the ills of modern society.

A source said that he “would not be surprised” if Bishop Williamson spoke there again in the near future. He said the bishop was willing to be “martyred for the faith and the truth”.

Bishop Williamson, a traditionalist Roman Catholic whose excommunication was lifted by Pope Benedict XVI last month to a chorus of international outrage, is understood to be staying with fellow priests at the Society of St Pius X in Wimbledon, south-west London.

He flew to London this morning after he was fired as head of the society’s seminary in Argentina and was given ten days last Thursday to leave the country.

Bishop Williamson is one of four bishops of the society who were consecrated illicitly by rebel French Archbishop Marcel Lefebvre who founded the society in opposition to the reforms of the Second Vatican Council.

All four incurred automatic excommunication as a result. Just days before the excommunications were lifted by Pope Benedict XVI last month, an interview where Bishop Williamson said there were no gas chambers and where he claimed no more than 300,000 Jews died in the Holocaust was broadcast on Swedish TV.

Wearing a clerical collar and a smart overcoat, Richard Williamson was met by three minders including a priest, Father David Sherry, after landing at 7am on a flight from Buenos Aires.

Walking into the arrivals area, the Bishop’s group forced its way through a scrum of photographers and reporters, helped by four armed police officers. He was whisked away by representatives of the ultraconservative society in a silver Land Rover with blacked out windows.

The car was seen later outside the society’s headquarters in southwest London.

His arrival in London was less eventful than his departure from Argentina where, dressed in a black baseball cap and sunglasses, he scuffled with a waiting reporter, raising his fist.

The reporter complained later that he had been shoved into a pole.

At Heathrow, supporters who turned up to meet him included Michele Renouf, the socialite who is a champion of the revisionist historian David Irving and was once banned from addressing a BNP meeting because her views were considered too extreme. She was accompanied by lawyers in case Bishop Williamson was arrested.

But it has been learned that no warrant is likely to be issued in Germany, where Holocaust denial is an offence and where he conducted his television interview.

Ms Renouf last year helped secure the release of Frederick Töben, an Australian holocaust denier, who was detained at Heathrow on a European Arrest Warrent issued at the request of German prosecutors.

“I honestly did think he was going to be arrested this morning,” Bishop Williamson’s lawyer said today. Kevin Lowry-Mullins, who represented Dr Töben in his successful attempt to have the warrant declared invalid, said he was ready to fight “vigorously” against any such attempts.

The Catholic bishops of England and Wales distanced themselves from Bishop Williamson today.

“He does not fall into the jurisdiction of any of the England and Wales bishops because he is not in full communion with the Catholic Church,” a spokesman said. “From the hierarchy’s perspective, he has got nothing to do with the bishops of this country.”

The Bishop was not available for comment. But a friend said his sole motivation in life was a “search for truth”.

He continued: “The Bishop believes we have not been told the whole truth about World War II. He believes a person should be able to question certain events about the Holocaust without being thrown into prison for thought crime. His Excellency does not deny the Holocaust, he just questions certain parts of it.”

He continued: “He is not a politician, and his blunt answers to straight questions have got him into consistent trouble.”

* Bishop Richard Williamson, 68, is one of four bishops of the ultra-traditionalist Society of St Pius X who had their excommunications lifted by the Holy See last month

* The society opposed the rendering into the vernacular of the Mass and the council’s reforms in general, including the seminal council document Nostra Aetate, which repudiated the charge of deicide levelled for centuries against the Jewish people by Christians