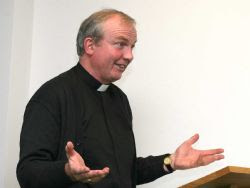 There is still time for Northern Irish society “to find a more creative vision for the future” of education than academic selection, according to Bishop Donal McKeown, Chairman, Northern Ireland Commission for Catholic Education.

In a letter to The Irish News on Monday, the Bishop said that there was a need to find another way to replace the 11 plus selection tests, which were abolished by Northern Ireland Education Minister, Cáitríona Ruane.

The tests streamed children into “academic” and “vocational” streams, with those performing well securing places in grammar schools, putting them on the fast track to attending third level education.

Minister Ruane's move has led to many grammar schools instituting their own testing system. At present, her department has ruled out abolishing such schools, which are seen as elitist by some.

One group of grammar schools, the Association for Quality Education (AQE), has sought to implement its own testing system.

Reacting against this, Bishop McKeown wrote that Catholic schools were opposed to the testing regime.

He pointed that a working group set up recently by the Northern Ireland Commission for Catholic Education (NICCE) had found “no real psychological, educational or philosophical literature which supports the theory that children at 11 can – or should – be neatly divided into two hermetically sealed groups, the ‘academic’ and the ‘vocational’”.

Children shouldn't be “so clearly differentiated that all teaching has to take place in different institutions”, he continued.

However, it has emerged that a growing number of Catholic grammar schools have sought to opt in to the new selection test proposed the the AQE, which has the support of mostly Protestant grammar schools, as well as leading politicians from the main Ulster Unionist and Democratic Unionist parties.

Reporter Henry McDonald, writing in The Observer last month, said that a significant number of Catholic parents want some form of selection.

He writes: “Catholic grammars know that if they completely abolished academic selection in favour of Ruane's criteria (postcode, feeder primary schools, siblings at post-primary schools etc), middle-class Catholics would vote with their feet.”

However, Bishop McKeown rejected this approach, and said that selection “seems to reflect and perpetuate an outdated system which has failed too many young people”.

He went on: “There is a growing consensus in the Catholic sector - and beyond - that a modern education system needs to move forward from such a sterile position rather than maintain it.

No Catholic school, he insisted “can act completely independently of other Catholic schools as all the stakeholders - trustees along with governors, principals, staff and parents - seek to work together in the interests of the common good”.

Any other approach, he continued “would seem to be based on a strange understanding of Church”.

Schools had to take the lead in finding a way out of the mess, but he said it was better to do it “in a way that promotes solidarity rather than merely defending narrow sectional interests”.

Meanwhile, The Irish News reports that members of the largest union within Catholic schools, the Irish National Teachers Organisation (INTO), intends to propose a boycott of new grammar entrance schemes.