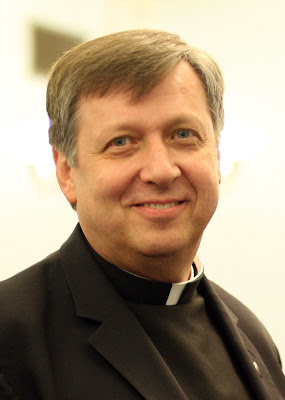 Fr. Larry Snyder, President of Catholic Charities USA has defended his acceptance of a position on President Barack Obama’s Council for Faith-Based and Neighborhood Partnerships, saying there is some convergence between Church teaching and the Obama administration’s policies despite other “very clear disagreements” on issues such as abortion.

He delivered his comments on Monday at the 2009 Catholic Social Ministry Gathering in Washington, D.C.

The annual event is co-sponsored by 18 national Catholic organizations, including Catholic Charities USA.

Thanking those who congratulated him on his appointment to the President’s Council, Fr. Snyder said he also received a “fair amount” of what he termed “hate mail.”

According to Fr. Snyder, such mail questioned why he would associate with a “contemporary Hitler” and told him he would probably go to hell for accepting the appointment.

Responding to critics, he said:

“First of all, there are some very clear disagreements between the teachings of our Church and some of the policies of this Administration. We need to be clear and upfront about this and never compromise our values in our dealings with any other organization.

“There can be no doubt that Catholic Charities is a firmly pro-life organization. Anyone who doubts this calls into question the thousands of women facing an unplanned or unwanted pregnancy who are given services from free pre-natal care to parenting or adoption services to support a woman in this crisis. In a very real way we give the Church credibility on this issue by providing options and support and not just wishing those in this situation well. Let me assure you the Administration is well aware of where we stand on this issue,” he said.

Fr. Snyder remarked that despite Catholic Charities’ differences with the Obama Administration, there are areas where Church teaching and administration policy “converge,” especially when it comes to the “poor and the marginalized.”

“I believe that we must take every opportunity to improve the lot of the poor in this country whenever we can. God will not forgive us for not speaking up about the rights of the unborn. But I believe God will also not forgive us for missing any opportunity to promote the care of the poor and vulnerable in this country. We will be faced with opportunities to do so with the Obama Administration and Catholic Charities will take them.”

Fr. Snyder said Catholic Charities USA needs to be a voice at the table of the President’s Council.

His remarks also noted both Pope Benedict XVI’s Lenten message on penitential fasting and the scriptural roots of Catholics helping the poor.

This help “is not because of a profound humanistic attitude toward life. It is because we have no choice.

If we take seriously the mandates of the Gospel as found in Matthew 25 and Luke 10 and John 13, we cannot do any less,” Fr. Snyder commented.

“While our resources are being severely challenged, our commitment and passion will not waver,” Fr. Snyder insisted.

“As Catholic Charities quickly approaches our centennial year, we honor the incredible work and commitment of all those who have gone before us and on whose shoulders we stand. But we also recommit ourselves to our Catholic identity and renew the passion for the poor that has been the hallmark of our network and will propel us into the future. But as we go, we carry with us, deep in our hearts, the faces of those who have a special claim on God’s love. For in their faces we see most clearly the face of the suffering Christ.”
+++++++++++++++++++++++++++++++++++++++++++++++++++
Disclaimer