Malaysia to allow Christians to use 'Allah' 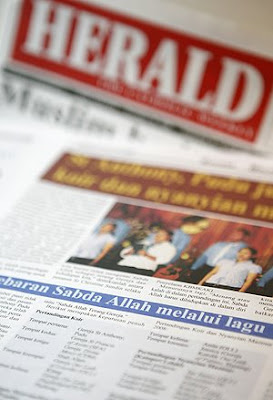 The Malaysian government has softened an earlier ban on the use of the word "Allah" by Christian publications to refer to God and is allowing them to use it as long as they specify the material is not for Muslims, a church official said Thursday.

The government had earlier argued that the use of Allah in Christian texts might confuse Muslims, who might think Allah refers to their God.

The revised order was issued Feb. 16 by Home Minister Syed Hamid Albar, said the Rev. Lawrence Andrew, the editor of the Herald, the Roman Catholic Church's main newspaper in Malaysia.

He said the publication has already started printing "For Christianity" on its cover.

The Herald publishes weekly in English, Mandarin, Tamil and Malay with an estimated readership of 50,000. The ban on "Allah" concerns mainly the Malay edition, which is read mostly by indigenous Christian tribes in the eastern states of Sabah and Sarawak. The other three editions usually do not use the word "Allah."

The dispute has become symbolic of increasing religious tensions in Malaysia, where 60 percent of the 27 million people are Muslim Malays. A third of the population is ethnic Chinese and Indian, and many of them practice Christianity.

Malaysia's minorities have often complained that their constitutional right to practice their religions freely has come under threat from the Malay Muslim-dominated government. They cite destruction of Hindu temples and conversion disputes as examples. The government denies any discrimination.

Andrew, the Herald's editor, said although the order "makes things easier" for the Herald, the newspaper will not drop a legal challenge against the ban. A court is due to hear arguments in the case Friday.

The Herald is arguing that the Arabic word is a common reference for God that predates Islam and has been used for centuries as a translation in Malay.

Andrew said the new order is still a violation of religious freedom guaranteed by the constitution because Christians will not be able to use any literature that does not carry the warning on the cover, including much imported material.

He said most Malay-language Bibles in Malaysia are imported from Indonesia, which uses a variation of the same language.

"If this (order) is enforced, it will be difficult to possess materials ... from Indonesia, and thus practicing our religion will not be easy. This goes against ... the constitution," he told The Associated Press.

Andrew said the order also prohibits the use of three other Arabic words — "solat," or prayer, "Kaaba," a holy site in Saudi Arabia, and "baitullah," or house of God — without the warning.

Ministry officials could not immediately be reached for comment.