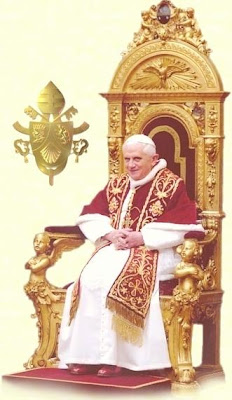 The controversy generated by Pope Benedict XVI's recent lifting of the excommunications from the four bishops of the Priestly Fraternity of St. Pius X (also known as the Society of St. Pius X) has given some critics, on both left and right, occasion to question the pope's commitment to the Second Vatican Council.

On the left, some voice the suspicion that the pope is really in sympathy with those who question whether the council really changed anything in the Catholic church, even if his views do not exactly match those of the Society of St. Pius X, which openly rejects the council in whole or in substantial part.

On the right, there is quiet rejoicing over the lifting of the excommunications because for these critics the action confirms their belief that Pope Benedict also harbors serious reservations about Vatican II.

Both sides, however, seem to base their judgments on the pope's previously stated views (especially in his address to the Roman Curia at Christmas 2005) that distinguished between two opposing interpretations of the council: what he called, on the one hand, a "hermeneutics of discontinuity" and, on the other, a "hermeneutics of reform."

In an article in the Feb. 2 issue of America magazine, Fr. Joseph Komonchak, professor of religious studies at The Catholic University of America, effectively challenges this assumption ("Novelty in Continuity: Pope Benedict's Interpretation of Vatican II").

The pope had begun his address to the Roman Curia by contrasting two ways of interpreting the council. The first interpretation Benedict did call the "hermeneutics of discontinuity," which he described as an approach that runs the risk of positing a rupture between the preconciliar and postconciliar church.

According to Fr. Komonchak's rendition of the pope's remarks, this approach "disparages the texts of the council as the result of unfortunate compromises and favors instead the elements of novelty in the documents."

Instead, he called it the "hermeneutics of reform" and devoted the greater part of his address to explaining what he meant by that phrase.

He did not mean that the council changed nothing. "After all," Komonchak writes, "if there is no discontinuity, one can hardly speak of reform."

On the eve of the council, Pope Benedict pointed out, three "circles of questions" had formed, all of which challenged the church to a new way of thinking and acting: about the relationships between faith and modern science, the church and the modern state, and the church and other religions.

In each area, the pope insisted, "some kind of discontinuity might emerge and in fact did emerge," but it was "a discontinuity that did not require the abandonment of traditional princi-ples."

"It is precisely in this combination of continuity and discontinuity at different levels that the very nature of true reform consists."

Vatican II's new definitions of the relationships between the church, on the one hand, and science, the state, and non-Christian religions, on the other, required the council to rethink and even correct earlier historical decisions in order to "preserve and deepen the church's inmost nature and identity."

Komonchak concedes, however, that "the clear disjunction between the two rival hermeneutical orientations with which the pope began his remarks [became] rather blurred in the course of his argument" -- which is also why some readers may have difficulty fully grasping the central point of this week's column.

Komonchak suggests that the real target of the pope's words may have been the traditionalist followers of Archbishop Marcel Lefebvre, who reject the council because of its perceived discontinuities from church doctrine.

The papal address could be read, therefore, as an effort to persuade traditionalists "that a distinction is legitimately made between the level of doctrine ... and the level of concrete application. ..."

However, some critics on the left and right have concluded, in the aftermath of Benedict's lifting of the excommunications, that the pope is really siding with the Lefevbrites.