Hands in the Till: When Priests Steal (Contribution) 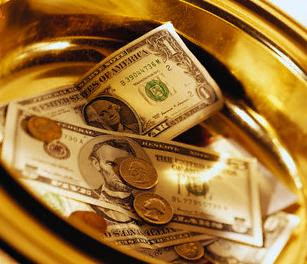 In a West Palm Beach courtroom this past week, Rev. Francis Guinan was on the witness stand in his own defense. He was accused of stealing $488,000 from St. Vincent Ferrer Church in Delray Beach, Florida during his three-year stint as pastor.

When asked on the stand about his use of parish money to pay for golf fees and trips to Las Vegas he answered that it was a “small compensation” for the service he had delivered to his parish.

And he added that according to canon law he was entitled to spend the church’s money at his own discretion.

A month earlier, the previous pastor of St. Vincent Ferrer, Monsignor John Skehan, was found guilty of stealing hundreds of thousands of dollars from the church in just the five year period covered in the statute of limitations. The thefts of both men were discovered through an anonymous tip from a parishioner.

Within the last decade, the Catholic Church has begun to grapple with a crisis that turns out to be more pervasive than first imagined. Catholics and the press are beginning to connect the dots, just as they did in the case of the sexual abuse crisis, and are seeing a larger pattern.

Other examples of embezzlement by Catholic clergy, all recently come to light:

- Rev. Steven Patte of a Chicago area church was accused in August 2008 of stealing twelve thousand dollars from his parish. A suspicious parishioner who was part of the committee that counted the weekly collection put a marked $100 bill in the collection during the liturgy to find it absent at the time of counting. Apparently, Patte was skimming the collection of its large bills. Meanwhile, no one can explain a $400,000 shortfall in funds at his parish.

- In another Chicago area incident, Rev. John Regan has been accused of creating a separate bank account and funneling parish money into it for his personal use. The thefts occurred between 2006 and 2008. He tended to use the money for gambling related activities. He is charged with money laundering.

- Between 1993 and 2006, Rev. Rodney Rodis was accused of stealing $600,000 from St. Jude's and Immaculate Conception parishes in the Richmond, VA diocese. He was charged with one count of felony embezzlement. When the diocese revealed this crime to church members, its officials also announced new systems for setting up tighter financial scrutiny within parishes.

- Perhaps the most notorious US case was the 2007 conviction of Rev. Michael Jude Fay of Darien, CT who stole $1.3 million dollars from his parish. Fay set up a secret bank account that was used to support a lavish lifestyle and a relationship with a special friend. He traveled throughout the world frequenting Four Season and Ritz Carlton hotels, drove a Jaguar, purchased Cartier jewelry and owned a condominium.

Eyes without a face

I would argue that a scandal like this creates a new round of questions about the current model of the priesthood.

Based on medieval definitions of the role of a bishop, Catholic pastors have both custodial and visionary responsibilities within their assigned parish. As visionaries, they offer ministerial services to the parishioners and preach the Gospel; as custodians of their parishes, they are the business managers who are responsible for finances and people management. Protestants typically separate these responsibilities, with the laity having oversight of the finances; this allows the full devotion of their clergy to ministerial duties.

The shortage of priests has required parishes to hire lay people for parish jobs and to include larger numbers of volunteers within leadership responsibilities. Before the impact of the shortage, Catholic pastors did not have to worry about close oversight of finances. In some parishes, the staff of priests even counted the collection themselves. When it came to financial management, there was no transparency—the only audits involved diocesan officials whose focus was on taxing each parish based on their collection totals in order to fund the diocesan operation. We can only wonder how much embezzlement was occurring in the past when there was little to no oversight.

Individual stories of embezzlement point to a potentially larger and more pervasive problem within the Catholic hierarchy that may reflect a moral collapse that is decades old—although, unlike the pedophilia scandal, there are no individual victims in these situations to come forward and expose decades-old crimes. We may never know the true extent of this problem in the Catholic Church.

The pedophilia crisis rocked the Catholic Church and created intense focus on the dysfunction of the church’s hierarchy. As the scandal broke, it appeared that the problem was isolated to a few serial pedophiles, but as more victims spoke out we learned that there was a systemic problem. And we learned too that in many cases the sexual abusers were being protected by their bishops. As the scandal became more transparent, many of the Catholic faithful were as upset with the cover ups as they were with the crimes.

Faced with a mounting dilemma that damaged trust between the laity and the ordained, the church was forced to take action. In the end, victims received settlements and blame was placed on homosexuality in the priesthood. The result? New presbyterial guidelines from the Vatican and witch hunts inside seminaries.

The private world of priests

The pedophilia scandal invited us to consider the private world of priests—all male, secretive, focused on survival as numbers dwindle. The Catholic system of the priesthood includes mandatory celibacy, adherence to superiors and the call to lead and bond with a parish while remaining set apart from its members.

From the theological perspective it is believed that priests receive a mark on their souls at ordination that separates them from the laity for the purpose of serving the laity. It is this mark on the soul that allows only priests and bishops to speak on behalf of the church, to interpret the Gospels within a sacramental setting and to offer the sacraments to the faithful. While priests lived in the boundaries of their parishes, often on the grounds of the church itself, their unique way of life separates them from the neighbors whom they serve.

Reflecting on the problem of priestly pedophilia in 2006, I explained that priests are asked to be disembodied voyeurs because of mandatory celibacy. “Eyes without a face,” priests are called to suppress the energies of their bodies while witnessing life flourish around them at every turn (baptizing children, marrying couples, providing services that support family life, etc).

Increasingly, we are learning that a male-only system grounded in mandatory celibacy creates an unhealthy environment where abuses of power and cover up of immoralities are too often the norm. It can be argued that the unique lifestyle of the priest creates the needs for compensation, the propensity toward addictive behavior and an expression of immaturity when it comes to sexuality.

The latest discovery of thefts by priests is yet another reason to examine the theology and polity of the Roman Catholic priesthood.

Some Parishes that had regular monthly meetings of their Financial Committees find that when a new Parish Priest arrives he spends so little time looking after the administration of the Parish that these meetings begin to stretch to maybe once every 3 or 6 months or only a few are called when it comes around to audit times or he needs money approved for some major project of his.

It also happens that most of the people in the Finance Committee when he took over may find they are too questioning about things and end up having their term of office ended and being replaced by the new Parish Priests elite who will not question or say no to anything.

The same thing can often happen to the FAS scheme within the Parish. Only those very close to the new PP will be on the committee, golf buddies, those whose kids are in Church groups and get free trips from Church etc. etc. Everyone has an angle and reason to be there.

There then is a change of lay staff and all of a sudden the new PP who never wanted to be involved in administration of book work takes over all the finances for a few years and collections seem to drop a lot!!!

Parishioners then hear all kinds of stories and he vanishes for several months and we hear he won't be back but he does come back but lots of questions remain unanswered. When he returns different financial system seems to be the order someone else is now doing the Banking, people he could have got to do it before his absence but for some reason he did not.

The Banks are not alone when people say more transparency is needed.

A blogger in the States has been indexing missing-funds incidents for two years now. The ratio of lay suspects to ordained suspects is about 51 to 17. See the label count on the right side of the Catholic Missing Money Index at http://rcmmindex.blogspot.com
-----
Many thanks for this interesting Clerical Whispers blog. You are helping our Church greatly.

I agree with you, Clerical Whispers.
The financial problem revolves around the fact that not only has the Church imposed celibacy, it has also imposed poverty, while requiring the priest to witness normal financial abundance all around him. The vesting of finanical matters in the laity is not the only difference between the RC and the protestant churches. Protestant churches treat their pastors like adults. Protestant pastors actually earn a normal (if not over-abundant) salary. And, part of a protestant minister's salary is a non-taxable housing allowance. As normal adults they learn how to budget. RC priests, on the other hand, get a tiny allowance from the church and never have to learn how to live on a salary because their other needs (housing, a car) are paid by the parish. This fosters a perpetual financial childhood in which the priest gets his allowance from mother (i.e., "mother church").
I think that Celibacy should be optional for parish priests, and we should be paying priests an adequate salary and requiring them to live on it. I doubt this would cost more.

People should use cheques rather than cash when giving to the church. Much harder for anyone to "skim" when the cheque is made to to "St. So-and-So's Parish."