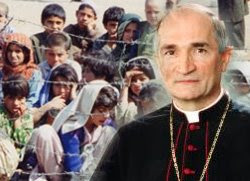 The global financial crisis is likely to dramatically impact the world's poor in coming months, depriving children of essential services in education and health care, a Vatican official said.

The negative consequences of the economic crisis "exert a more dramatic impact on the developing world and on the most vulnerable groups in all societies," said Archbishop Silvano Tomasi, the Vatican's permanent observer to U.N. organizations in Geneva.

He spoke at the 10th Special Session of the Human Rights Council in Geneva Feb. 20. His speech, released by the Vatican, focused on the deeper causes of the economic crisis and its effect on people in developing countries.

Archbishop Tomasi cited predictions that in 2009 the current crisis could push more than 50 million people below the threshold of $2 per day, in addition to the 130 million people pushed into poverty in 2008 by rising food and energy costs.

The archbishop said low-income countries heavily depend on two methods of cash flow, foreign aid and remittance pay from citizens working abroad. Both are expected to decline in coming months, he said.

That will directly affect the educational, health and nutritional programs funded by aid programs, as well as the educational opportunities paid for by workers' remittances, he said.

"If the reduction of both aid and remittances continue, it will deprive children of the right to be educated," he said. That will represent a double negative consequence, preventing children from the full exercise of their talent and setting up preconditions for a country's long-range economic hardship.

"Lower educational investment today, in fact, will be translated into lower future growth," he added.

Archbishop Tomasi said child and adult mortality rates could worsen; he noted that a significant increase in the infant mortality rate in poor countries was forecast for 2009.

He recommended a "coherent approach" to preserve human rights and to promote achievement "through a renewed sense of solidarity."

He warned that past mistakes could be repeated if strong international action is not taken to place financial and economic activity "on an ethical road that can prioritize persons, their productivity and their rights over the greed that can result from a fixation on profit alone."

Although certain banks and people can be blamed for the crisis, Archbishop Tomasi said a wider cause was the all-consuming nature of the profit motive.

"Free competition has destroyed itself by relying on profit as the only criterion," he said. Financial activity "must include the promotion of the common good among those who lend, those who borrow and those who work," he added.