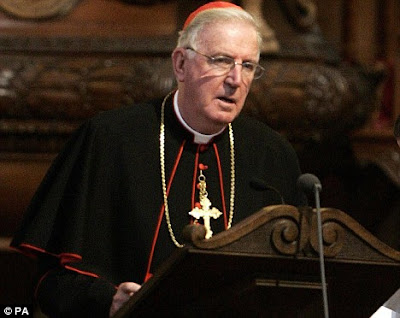 Anti-discrimination legislation is being used to limit freedom of religion “in unacceptable ways”, says the head of the Roman Catholic Church in England and Wales.

In a lecture at Westminster Cathedral on the Church's future, Cardinal Cormac Murphy-O’Connor said the state needed to acquire a better understanding of the contribution and place of faith in British society.

He said: “Legislation on discrimination, much of it good in itself, is now being used to limit freedom of religion in unacceptable ways. The sad and totally needless conflict over the Catholic adoption agencies is one example.

“But that is a symptom of a wider prejudice that sees religious faith as a problem to be contained rather than a social good to be cherished and respected, and which properly and necessarily has a public as well as a private dimension.”

The Cardinal called upon local authorities to give the voluntary sector a “greater and more autonomous” role in the delivery of public services and to see the Church as a “partner in the common good, not an adversary”.

He went on to warn that secularism was based on an “impoverished understanding of what it is to be human” and therefore could never fully satisfy human needs.

“Many of the arguments of secularism seek to offer a new and liberated self-sufficient humanism. Yet, I think, they can only end in the death of the human spirit because they are fundamentally reductionist,” he said.

The Church, meanwhile, “must always be an active agent in the creation and building up of a genuinely humane culture” and not given in to drawing pessimistic conclusions about its future.

He continued: “I think the greatest danger for us at the moment is to let ourselves believe what secular culture wants us to believe about ourselves, namely, that we are becoming less and less influential and are in decline.

“There are certainly challenges and there is much work for us to do. But on the contrary I believe that the Church has a vigorous life, and a crucial role to play in our society - more important than at any other time in our recent history.”

The Cardinal said the present time was one of “preparation rather than diminishment” as he called upon the Church to refresh its understanding of the faith, work on renewing the parish community and return to a life of prayer.

“The Spirit is preparing us to bring something ‘other’, something ‘different’ to our culture, something which our culture cannot bring for itself. This ‘other’ is nothing else but the truth and life-giving presence of God,” the Cardinal said.

Addressing the global financial crisis, he said a strong ethical framework and effective regulation were necessary if the market was to serve the common good.