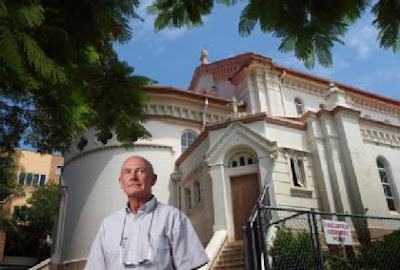 THE Catholic hierarchy in Brisbane has accused a rebel priest of betraying their trust and suggested he should resolve his own doubts about the faith before trying to guide others.

The Brisbane Archdiocese is at loggerheads with Father Peter Kennedy, who has refused to abandon his St Mary's parish despite being sacked for unorthodox practices.

In an effort to break the deadlock, the Archbishop of Brisbane, John Bathersby, and Father Kennedy have agreed to mediation with former High Court judge Ian Callinan.

Archbishop Bathersby sacked Father Kennedy 10 days ago for being "out of communion" with the church.

The controversial priest openly defies the Vatican by allowing women to preach, blessing gays, conducting unorthodox sacraments and denying the Virgin birth. He claims the church is dysfunctional and solely concerned with maintaining its own authority.

Some observers have suggested Father Kennedy is a problem of the church's own making, and argue he should have been shut down long ago. The chancellor of the Brisbane Archdiocese, Father Adrian Farrelly, told The Age that Father Kennedy had abused the trust placed in him.

"Bishops don't have closed-circuit television in our house or our churches. They appoint us and trust us to look after our parishes in accordance with accepted Catholic teachings," Father Farrelly said.

"Father Kennedy himself said, 'We kept below the radar'. He was aware that what they were doing was not kosher and deliberately kept it secret."

It was not until some conservative Catholics complained to Rome that Father Kennedy's practices were investigated.

Father Farrelly said he was "ticked off" with Father Kennedy's criticisms of the church hierarchy.

"He's saying I'm a complete nerd, I'm out of touch with the world … I've never had a skerrick of sensitivity to any discrimination (people) may have felt, I wait to call the Pope every time I want to have a thought. Well, bloody hell, do you mind?"

He said St Mary's was not the only parish trying to work out how to convey the Catholic message in a modern world, but emphasised churches still had to follow Catholic teachings and practices. "It's like going into Red Rooster and asking for KFC. They're not going to give it to you," he said.

Father Farrelly said he was baffled as to why Father Kennedy had not left the church, given he had publicly said he was "embarrassed" to be a Catholic.

The church hierarchy was concerned about Father Kennedy's spiritual influence on his flock, he said.

"If (the church) is so bad, aren't there decisions you need to make yourself? And in that position, what effect are you having on people listening to you, following you?" he said.

The church considers Father Kennedy's tampering with the wording of the baptism liturgy his biggest transgression. Father Kennedy eschews the "Father, Son, Holy Spirit" wording, referring instead to the "creator, sustainer and liberator of life".