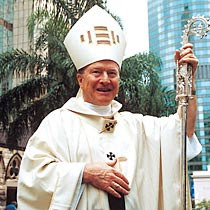 Brisbane's Catholic Archbishop John Bathersby has been targeted with a bomb threat over his decision to remove dissident priest Fr. Peter Kennedy from St. Mary's church in South Brisbane.

"A letter was received at the Archbishop's residence threatening a bomb. It mentioned a bomb and it also mentioned St Mary's church, but that's now in the hands of police," the spokesman said.

A police spokesman confirmed a bomb threat had been made and investigations were underway.

Father Peter Kennedy is refusing to leave St Mary's church after he was sacked by the Archbishop for practices deemed out of communion with the Catholic Church, such as blessing homosexual couples and selling books that questioned the divinity of Jesus.

St. Mary's has been the centre of controversy in recent months, with Fr. Kennedy even attracting the attention of the Vatican.

The Sydney Morning Herald described St, Mary's as a "green-leftist New Age drop-in centre" that Fr. Kennedy is refusing to leave, despite repeated requests by the Archbishop.

"Footage of Mass - or whatever it was," the Morning Herald description continued, "at St. Mary's on ABC-TV this week showed a pony-tailed man - not a priest - in a bright shirt waving around a giant Communion host in a haphazard way, while people sat on the floor at his feet. It looked more like a yoga session, with meditation and lay people taking to the pulpit to give 'sermons' which have nothing to do with the Bible."

Despite the bomb threat made to his residence, Archbishop Bathersby said the Brisbane Catholic Archdioceses' priority was to ensure the proper transition of the parish to the new administrator, Fr. Kenneth Howell, Dean of St. Stephen's Cathedral.

"In this difficult situation, I believe a sensible next step would be to have an experienced, independent and eminent mediator meet with the Archdiocese and Fr. Kennedy to attempt to achieve a peaceful and dignified outcome," the Archbishop said.

To this end the Archbishop has nominated former High Court Judge Ian Callinan to be the independent mediator.

The Chancellor of the Brisbane Archdiocese, Father Adrian Farrelly, says Mr. Callinan is a good choice.

"If you were going to be involved in a mediation to have someone of his calibre be the mediator it seems to me ... personally I'm very glad and I'm sure the Archbishop is very glad that Justice Callinan has agreed to do the job," he said.

ABC News reports that Father Kennedy said he will not obey his bishop, he will not resign and he will not participate in the mediation with the Archdiocese.

"The people are not going to receive Fr. Howell. He's naive enough to think he can walk in there on Sunday and the people will welcome him," Fr. Kennedy said in a Courier Mail report.