Cardinal Rouco opens cause of canonization for Spanish couple 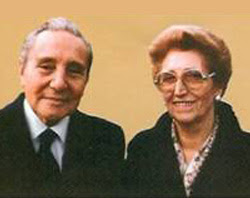 The Archbishop of Madrid, Cardinal Antonio Maria Rouco Varela, presided last Thursday at the opening session for the cause of canonization of the married couple Paquita Dominguez Susin and Tomas Alvira Alvira.

With the eight children of the Opus Dei couple present at the ceremony, Cardinal Rouco underscored the “need to proclaim and bear witness to the gospel of the family,” and referred to the Alviras as “an example of this testimony in the 20th century.”

Cardinal Rouco recalled that before the new millennium, Pope John Paul II established the study of holy Christian marriages as one of the objectives for the Church.

At the time, John Paul II said, “The Christian witness of the family is very much needed.”

The ceremony for the Alviras took place in the crypt of St. Michael’s Basilica in Madrid.

The postulator of the cause, Jose Carlos Martin de la Hoz, commented on the occasion, saying, “The Church asks us now to show that their lives in the Prelature of Opus Dei, during so many years, were truly heroic.”

The postulator added that a tribunal has been established to gather the necessary evidence “to determine if they can be considered as examples of Christian life and as intercessors for all Christians.”

Tomas Alvira and Paquita Dominguez joined Opus Dei in 1947 and 1952 respectively. Alvira was professor of Natural Sciences and a researcher in Aragon and his wife worked as a teacher in Madrid.