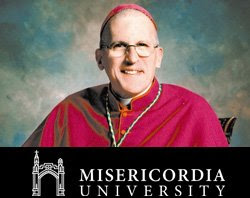 Following controversy over the Diversity Institute at Misericordia University’s hosting of a homosexual activist, Bishop of Scranton Joseph F. Martino has asked the university to seriously consider discontinuing the institute and to explain its efforts to teach Catholic sexual morality.

Bishop Martino had warned before Keith Boykin’s appearance that he had “absolute disapproval” for the institute’s invitation to have him speak at its annual dinner and as part of Black History Month.

The bishop charged that the university was “seriously failing” to maintain its Catholic identity in the case.

On Tuesday the university issued a statement saying Misericordia University “has been committed deeply to its Catholic mission and the teachings of the Catholic Church for 85 years.”

“Misericordia University welcomes the opportunity to discuss these matters with the Bishop and his delegates at their convenience,” the statement continued, saying the university will not make any further public comments.

In a statement of its own, the Diocese of Scranton asked the school to inform its alumni and all the Catholics of the diocese about its efforts to teach Catholic morality regarding sexuality and homosexuality.

“In doing this, the Bishop believes the school should speak precisely, naming courses, content and even catalog numbers,” the diocese said.

The diocese reported that Boykin in at least one of his talks discussed advocacy for issues such as same-sex marriage and addressed the intersection of religion and sexuality.

“The Catholic Church’s teaching on homosexuality was not presented at the event,” the diocese said.

According to the diocese’s statement, Bishop Martino has said that students attending a Catholic institution should have “a clear understanding” that homosexual activity is “not condoned” by the Church and “should never be construed as acceptable behavior,” though all persons should be treated with dignity.

“Bishop Martino is also asking Misericordia to seriously consider discontinuing its Diversity Institute, which co-sponsored Mr. Boykin’s appearance,” the Diocese of Scranton said, adding that Boykin had previously served for a week as a visiting scholar with the Institute.

The bishop believes that students should learn respect for all races and cultures, but holds that viewpoints that are in “direct opposition to Catholic teaching” should not be presented under “the guise of ‘diversity’.”