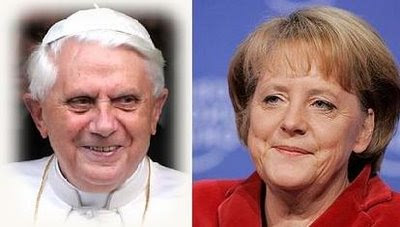 Chancellor Angela Merkel's attack on compatriot Pope Benedict XVI for welcoming back into the Catholic Church a Holocaust-denying bishop won widespread praise in Germany on Wednesday.

The Vatican said Wednesday, Holocaust-denying bishop Richard Williamson must "unequivocally" distance himself from his statements before he can be admitted to episcopal office in the Roman Catholic Church.

It also said that Williamson's remarks denying that the Nazis used gas chambers to eliminate millions of European Jews in World War II were not known to Pope Benedict XIV when he decided to lift the excommunication of four renegade bishops last month.

The Vatican statement also said that the rebel Priestly Association of Saint Pius X, to which the rebels belonged, must recognise the reformist Vatican II Council of 1962-65 and the popes who followed it.

Speaking Tuesday, Merkel said the pope's move could not be allowed to pass "without consequences" and called on the Vatican to "clarify unambiguously that there can be no denial" that the Nazis killed six million Jews.

In an apparent victory for Merkel, the Vatican later Wednesday called on the bishop - British-born Richard Williamson - to distance himself "unequivocally" from the comments.

Merkel's unusual decision to become embroiled in the row prompted warm praise from Jewish groups, German bishops and the media.

Stephan Kramer, general-secretary of Germany's most prominent Jewish organisation, the Central Council for Jews, said the issue goes beyond religion.

"This underlines one more time she is very sensitive about it but it underlines also ... that the issue is no longer just an internal Catholic or an internal religious issue. This goes well beyond this," Kramer said in an interview with AFP.

In a separate opinion article in centre-right daily Die Welt, Kramer denounced as a "scandal" Williamson's remarks in which he denied gas chambers were used by the Nazis to exterminate Jews.

"Whoever calls the Holocaust into question and misrepresents the gas chambers as 'disinfection chambers' (as did Floriano Abrahamowicz, a fellow member of the ultra-conservative Priestly Society of Saint Pius X) belongs not on a bishop's chair but in the dock," Kramer wrote.

Bishop Georg Sterzinsky told mass circulation daily Bild that "denying the Holocaust is monstrous and a strain on relations with the Jewish community."

The decision to lift Williamson's excommunication is "an action I do not think was right. It must be put right," Sterzinsky was quoted as saying. If the Vatican has made a mistake, it should apologise, he added.

Her comments were "an unusual, even spectacular political intervention in the pope's core business," wrote the Tageszeitung daily. "And - it was necessary."

The Sueddeutsche Zeitung said in an editorial: "Angela Merkel, the Christian Democrat Chancellor, is right: we need a crystal-clear explanation from Rome."

"Disappointment with this pope is growing," the paper concluded.

Bild's editorial blamed not the pope himself, but whomever advised him to lift Williamson's excommunication.

"Holy Father. I prayed for you yesterday in my favourite church ... I have no grudge against you or against God. But I also prayed that God punish all your staff."

Benedict was not without his defenders, however, notably his brother, Georg Ratzinger, also a priest.

"He doesn't need me to defend him. But it does annoy me how stupid and ill-informed several people are that are attacking him," he said in an interview to appear in Thursday's edition of the Leipziger Volkszeitung.

Others leapt even more vigorously to his defence. Another German bishop, Gregor Maria Hanke, was quoted by German magazine Focus as saying Merkel's lashing-out at the pope was "incomprehensible and outrageous."

But Kramer said the pope's failure to leave the ultra-conservative elements of the Catholic Church in the cold was a worrying sign for the future.

"It looks to me that the handshake with the brotherhood is actually one more step in a long road that leads to more fundamentalism within the Catholic Church," he told AFP.

They both got it wrong. He did not know the facts about Williamson and she did not understand what was meant by lifting an excommunication and confused it with "rehabilitation".

Sinners should be welcomed into both churches and synagogues. Those suffering from delusions should not be barred from either provided they are not given positions of responsibility. Williamson is not being any position other than that of a penitent ex-schismatic.