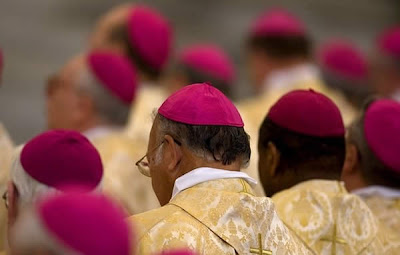 The upcoming Synod of Bishops for Africa will give the continent's Catholic bishops the opportunity to focus on some of the most pressing needs of people besieged by poverty, reeling from rebel violence and seeing little development assistance from their governments, said the archbishop of Gulu, Uganda.

"The synod assembly of Africa comes at a time when Africa in general and Uganda in particular is in need of reconciliation desperately, struggling for justice and yearning for peace," Archbishop John Baptist Odama told more than 500 people Feb. 23 during the annual Catholic Social Ministry Gathering in Washington.

Development is the road to peace, he said. Until poor Africans feel they have a chance to live in the dignity promised by Christ, the African continent will be unable to experience lasting political stability or overcome the devastating effects of poverty, he said.

People across the continent are experiencing deteriorating living conditions, reduced social services, a rising incidence of HIV and AIDS, human rights abuses and skirmishes that are "perpetuated by arms dealers," the archbishop said. Such difficulties remain, he explained, despite broader attention from the world and a significant boost in foreign aid.

"Despite so much aid flowing into Africa, it has had little tangible impact," he said, detailing how little assistance makes its way to the people most in need.

The archbishop described a complex series of challenges facing the African bishops when they meet in October at the Vatican. Top among them is the role of the church in securing peace in the midst of searing violence.

The dire conditions Africans endure lie outside the church's work, but severely limit the church's ability to serve people, evangelize and promote reconciliation, and thus must be part of the discussion during the synod, Archbishop Odama said.

Meanwhile, advocates in the U.S. can play a role by influencing the White House and Congress to adjust U.S. foreign policy to better meet Africa's pressing needs, he said.

"What can Catholic social ministers in the United States do to promote justice, peace and reconciliation in Africa?" he asked. "Advocacy for the promotion and defense of human dignity."

He urged the group, which was heading to Capitol Hill Feb. 24, to discuss a wide variety of justice issues, to push not just for increased aid to the continent but for reforms in how aid is distributed so that people in the deepest need are the beneficiaries.

Archbishop Odama said he regularly visits and stays overnight with the displaced Acholi people who have been forced into camps because of rebel raids in northern Uganda, said much of the violence across the continent would end if the arms trade ended.

The area of northern Uganda, once the breadbasket of Africa, is reeling under more than two decades of disruptive attacks by the Lord's Resistance Army under the direction of its leader, Joseph Kony.

The rebel group has abducted an estimated 30,000 to 60,000 Ugandan children, raped and mutilated women and viciously killed men in villages in the Acholi region since 1987, according to human rights reports.

Archbishop Odama has met with the rebels several times in an attempt to negotiate peace. Not once, he told CNS after his presentation, did he fear going into the bush to meet Kony's forces.

More recently, most of the Lord's Resistance Army forces have left Uganda, moving into neighboring Congo, where violence among competing rebel forces has escalated.

Archbishop Odama acknowledged that, during the height of the attacks, he received threats on his life because he challenged the rebel group to put down its arms. Despite the threats, he turned down an offer from the Ugandan government to provide him with round-the-clock security.