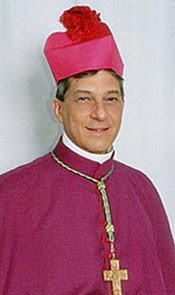 A Roman Catholic priest in Brazil who defended the use of contraceptives and the rights of homosexuals has been suspended by his local archbishop.

Father Luiz Couto has been told he can resume his priestly duties in the north-eastern state of Paraiba if he publicly renounces his views.

The priest is also a member of Congress for the Workers' Party of President Luiz Inacio Lula da Silva.

He says he will continue to celebrate Mass at home with friends.

It appears that Father Couto landed in trouble with the Church authorities because of an interview that he gave to a local newspaper defending the use of condoms as a matter of public health.

He also spoke out against discrimination against homosexuals and said he was opposed to celibacy for priests.

The archbishop in the state of Paraiba, Aldo Pagotto, said the ambiguous views expressed in the interview over gay marriage and contraceptives were diametrically opposed to the official teaching of the Church.

"This is intolerable," the archbishop said in an interview with Brazil's TV Globo.

Father Couto says he has not been officially notified of the decision and will continue to celebrate Mass at home with friends. Archbishop Pagotto is reported as saying the suspension will be lifted if the priest publicly renounces the views expressed in the interview.

A spokesman for the suspended clergyman said he was not an advocate of gay marriage, but an opponent of discrimination.

As an elected member of Congress for President Lula's Workers' Party, Father Couto has been a high profile advocate for human rights.