Catholic survivors attribute ‘miracle on the Hudson’ to God’s mercy 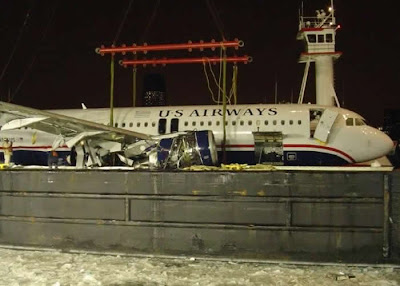 "The odds were against us but God was with us," said Fred Berretta, a survivor of US Airways Flight 1549 that crash landed in the Hudson River Jan. 15.

He was flying home that day from a business trip in New York when the plane struck a flock of birds, causing both engines to fail.

"We had a phenomenal flight crew, but God was our air traffic controller," he said.

Berretta, one of several Charlotte-area Catholics aboard the flight, is a parishioner at St. Matthew Church.

All 155 people aboard the flight survived the emergency landing.

Berretta said he believes it is "a testimony to God’s mercy."

"I believe it was miraculous that all the things came together that allowed us to survive," said Berretta, himself a pilot.

Just hours after the crash, he was asked in an interview with a national television network if he was a religious man. His answer was honest, "I try to be."

"Quite a long time ago I had a conversion type of experience back to the Catholic faith," Berretta said in an interview with The Catholic News & Herald.

He had been away from the Catholic faith since childhood, but began attending Mass again on a weekly basis during his mid-20s.

"When I look back on that part of my life, I can say that I was trying, trying but struggling to live the Catholic faith more fully," he said.

More recently, however, Berretta had experienced a deeper draw to devotional prayer.

In the weeks leading up to the plane crash, he began praying the Rosary on a daily basis.

And the day before the crash he had prayed the Chaplet of Divine Mercy.

"That was a prayer that I hadn’t said in a long time," said Berretta, as he recalled reading about a message that Jesus gave to St. Faustina Kowalska, the Polish nun who said she had a vision of Jesus in which he asked for devotions to divine mercy.

"I remember reading in that little booklet that Jesus said to Sister Faustina that the 3 p.m. hour is the hour of mercy, and whatever you ask of the Father in virtue of my passion during this hour will be granted.

"It sort of hit me as we were going into the water that it was in the 3 o’clock hour. So I asked God to be merciful to us and I said a few Hail Marys and I reconciled myself to the fact that I might not live through it," he said.

In the aftermath of the crash, Berretta said he has been "giving a lot of thought to the power of those prayers."

"When you go through an experience like this — if you have faith — you feel a profound sense of gratitude.

"I try to be very thoughtful of how fortunate I am and we all are," Berretta said. "I feel that almost obligates me to do something … to share that."

Fellow survivor Victor Warnement came away from the experience with a similar sentiment.

"You don’t go through an experience like this without thinking, ‘How do I give more?’" he said.

Warnement, a parishioner at St. Gabriel Church in Charlotte, believes he and the other passengers aboard Flight 1549 were part of a miracle.

Being God is a great job. If anything good happens, like people on this flight being rescued thanks to skill of pilot and rescue services, then God gets the credit. If anything bad happens, like hurricanes, earthquakes,droughts, tsunamis then it's nothing to do with God.