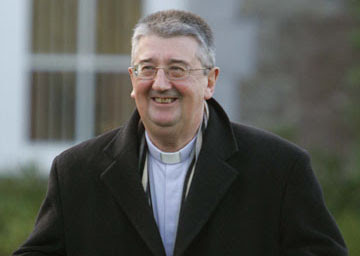 The Archbishop of Dublin last night welcomed revised child protection guidelines issued by the Catholic Church's abuse watchdog that will result in the setting up of a new database of clerical abuse allegations on both sides of the Border.

Dr Diarmuid Martin said it was "a frightening fact" that it was impossible to establish the exact number of sex abuse allegations in each diocese because previous reporting of allegations was so unreliable.

And he sought further assurances from other bishops and religious leaders that revised Church guidelines on child protection would be applied in a coherent and consistent manner throughout the country.

His comments came after the publication of the annual report of the National Board for Safeguarding Children in the Catholic Church (NBSCCC) and updated guidelines for keeping children safe from abuse.

The new standards set out in the document, 'Safeguarding Children', are the third attempt by the Irish Catholic Church to bring its internal Church into line with the differing statutory requirements in both the Republic and Northern Ireland.

Last year, 26 dioceses in Ireland notified the board of 56 allegations of abuse, 21 involving priests who have since died. One priest has been charged.

However, inquiries into the way the guidelines were applied in the Cloyne diocese throw doubt on the accuracy of this figure.

The NBSCCC said it believed all dioceses are now following appropriate procedures on referring new allegations.

Board chairman Aidan Canavan said he had received "an absolute assurance" that all bishops and leaders of religious orders would sign up to the revised standards, and that they would be held accountable for any breaches of these standards.

Ian Elliott, chief executive of the NBSCCC, said the new guidelines removed any ambiguity in child protection standards throughout the country.

"Our expectation is that there will be immediate, effective, full and timely reporting to the key statutory agencies -- the HSE, the gardai, PSNI and the Northern Ireland health authorities.

"The person who holds the information about a suspected allegation or complaint is responsible to make this known. There is no ambiguity now."

Cardinal Sean Brady immediately welcomed the board's report as a step in the right direction, and said it was "an indication of the church's resolve to protect children at all times".

Dr Martin welcomed as "a significant step" towards full future accountability a pledge by the board for the setting up of a database.

However, a spokesman for Dr Martin pointed out that neither report dealt with an ultimatum -- delivered to him at a stormy day-long summit meeting of bishops and religious superiors in Maynooth, Co Kildare, last month -- for solemn protocols from his religious peers assuring him that diocesan and religious priests working in Dublin were in compliance with the high standards.

An outcome from the Maynooth summit was a commitment by Mr Elliott to undertake a fresh audit of actual practice in all dioceses and religious orders.