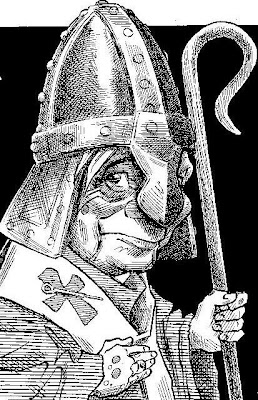 Back in 1992, Jacques Delors called for “a soul for Europe.”

As president of the European Commission, Delors noted the fractious nature of the European Union—even before it grew to its present cumbersome membership of 27 disparate nations.

He argued that if Brussels failed to inject a spiritual dimension into the EU, it wouldn’t be able to command the allegiance of Europe’s citizens.

The Vatican raised its profile in Europe powerfully under the papacy of John Paul II.

Now it is pursuing an aggressive agenda to popularize its religion on the Continent.

It is ratcheting up the use of mass media; it is intensifying its diplomacy with capitals from London to Moscow and beyond. In this context, the consummate skills of Pope Benedict xvi are proving invaluable. He is a master diplomat, playing the role of balancer between the competing powers that seek to dominate Europe’s soul. Yet few understand this complex and clever man, Joseph Ratzinger. Even fewer appreciate the unerring strategy that he pursues.

A case in point is the recent kerfuffle over the Vatican’s lifting of the excommunication on the Holocaust-denying Bishop Richard Williamson. The Chancellor Vs. the Pope Pope Benedict xvi hit the headlines in January when he approved lifting the excommunication of the bishops who lead the traditionalist Society of St. Pius x (sspx).

The stated reason for the decision, according to a January 21 Vatican decree, was largely “to promote unity in the charity of the universal church and to try to vanquish the scandal of division.” When it emerged that one of the four bishops, Richard Williamson, was a devout Holocaust denier, this brought Germany’s Chancellor Angela Merkel out of her corner swinging.

“This should not be allowed to pass without consequences,” Merkel declared, in a politically ill-considered, yet morally persuasive and powerful criticism of the German pope.

“This is not just a matter, in my opinion, for the Christian, Catholic and Jewish communities in Germany, but the pope and the Vatican should clarify unambiguously that there can be no denial and that there must be positive relations with the Jewish community overall.” Such criticism of a currently sitting pope from a secular democratic leader is unheard of. Merkel’s outburst did not sit well with the right-wing Catholic elites that dominate the European Union. While the German press largely joined Merkel in baying after Benedict’s blood for his apparent glossing over of Williamson’s anti-Semitism, the more astute observers recognized her political error. The center-right Frankfurter Allgememeine Zeitung noted, “[T]here is widespread unease among private individuals and church members who are critical of the church’s politics that Merkel—who was quick to visit Rome (after the pope’s election)—has ventured into forbidden territory. The Catholic Church is older than the Christian Democratic Union, and older than the German state” (February 5). Pope Benedict’s brother, George, joined the fray in defense of his eminent brother. The German center-right daily Bild headlined, “George Ratzinger Slams Angela Merkel Over Criticism” (February 5).

German Bishop Gregor Maria Hanke, Bild noted, “also slammed Merkel’s opinion, saying he finds it disconcerting ‘how the pope’s integrity is now being questioned by politicians and statesmen.’” Bild also noted, “Even members of the German parliament are criticizing Merkel for involving herself in the debate surrounding the rehabilitation: csu politician Bernd Posselt warned the chancellor about continuing to ‘act as the pope’s teacher’” (ibid.). It quickly became clear that Merkel’s move could seriously hurt her political career in an important election year. Feeling the heat, Germany’s chancellor took the initiative the day after George Ratzinger’s attack. She contacted the Vatican to request a telephone conversation to put things right with the pope. The upshot was that at midday on February 8, the Holy See Press Office director and the spokesman for the German federal government released the following joint communique: “The Holy Father Benedict xvi and German Chancellor Angela Merkel, in a telephone conversation which took place at the request of the chancellor, were able to reciprocally exchange of points of view, in an atmosphere of the greatest respect.” The German government spokesman and Holy See Press Office director commented, “It was a cordial and constructive discussion marked by their shared and profound conviction that the Shoah represents an ever-valid admonition for humankind” (Vatican Information Service). But the damage to Merkel’s political career had already been done. The German chancellor now has one great black mark against her in the eyes of the most powerful political group within the German parliament, the influential right-of-center Catholic lobby.

This also happens to be the case with the European Parliament where the European People’s Party (epp), the largest political party within that body, is dominated by powerful Roman Catholic connections. Waiting in the Wings At this juncture, Europe is in crisis. Facing its toughest test since the European vision was launched with the Treaty of Paris in 1952, the EU is fragmenting along nationalist and protectionist lines in reaction to the deepening global economic crisis.

Amid this crisis, Germany’s export-based economy is being hit hardest of all. As 2009 unfolds, deep fissures are appearing within the EU that seem to some to spell the end of the great united European dream. In the wings—observing, participating actively in and occasionally commenting on this crisis—waits an institution that, as faz noted, is far more ancient than any of Germany’s—or Europe’s—political parties.

Its resilience is borne out by its almost 2,000-year history.

It has survived contests between church and state to rebound, time and again, in the wake of failed empires, redundant dynasties and the ebb and flow of economic conditions. The Vatican looks on and bides its time. It is significant that in this latest verbal contest between church and state, it was the state that blinked first. Pope Benedict clearly won the day politically, within a crucial election year for the European Union’s chief law-making institution, the European Parliament, and the EU’s leading nation, Germany. His win was Merkel’s loss. Strategy Few observers read between the lines of Joseph Ratzinger’s crafty, carefully chosen and deliberately challenging public statements and power plays as he steadily follows his agenda to “Christianize” Europe, to give Europe its “soul.” As Pope Benedict xvi, Ratzinger declared his hand against pan-Islamism and secularism in his infamous speech at Regensburg University in 2005.

Shortly after that speech produced a great outcry against him from leading Muslim clerics, the pope met with leaders in the Muslim religious community to pour a calming diplomatic oil upon the turgid waters that he had stirred.

But he did not recant his position, which behind closed doors remains powerfully anti-Muslim. With the sspx affair, Benedict did it again. This is an extremely astute pope, with long experience roaming the corridors of Vatican diplomatic power.

There can be no doubt he knew that his reinstatement of Bishop Williamson, an unrepentant Holocaust denier, would cause an outcry. It did. It surely did from the Jewish community. Just as he did with leading Muslim clerics after their being insulted by his Regensburg speech, Benedict met with leaders of the Conference of American Jewish Organizations on February 12 in a diplomatic maneuver to both assure world Jewry that they had the respect of the Vatican, and to create an official forum for his announcement that he had accepted the invitation to visit Israel. This was followed days later by the Vatican announcing that Benedict would visit Israel in May of this year. Thus the pope remained headline news for the month of February. The Vatican is expert at playing the world’s media machine.

The airing of the Williamson affair, like the Regensburg speech, gave the pope an opportunity to declare a public stance on the Holocaust, subliminally casting further doubt as to its historicity in the mind of a public being increasingly distanced by time from its reality.

At the same time, it gave the pope opportunity to again publicly endorse in the mind of the people his claim to hold no ill will against world Jewry, though the Vatican still counts them as being outside God’s kingdom and prays for their conversion to the Catholic faith. Benedict is a pope who out of one side of his mouth lauds ecumenical dialogue and out the other declares that Roman Catholicism is the one true faith and all other Christian denominations are spurious. This is simply a pope for all seasons. He is a master diplomat, with a universal vision from which he will not retreat one iota. “A Soul for Europe” So what is really behind all this? The Vatican needs a powerful political platform to progress the fulfillment of its universal vision.

The Vatican state does not provide that.

A regeneration of the Catholic faith within a federal collective, the European Union would provide the Vatican with a tremendously strengthened power base from which to spread its vision worldwide. That is Benedict’s goal. To this end, the combined media power of the Vatican television station h2o, the European Parliament’s extremely powerful television station Europarltv, the European Union’s cultural website, and the Roman Catholic-dominated epp’s new Web television station, Dialogue tv, is designed to spark the European public with a common drive to establish that which Jacques Delors called “a soul for Europe.” This “soul for Europe” will be Roman Catholic to its core. That fact is certain in the mind of Joseph Ratzinger. Watch carefully how Benedict handles his upcoming visit to Israel. Watch the European parliamentary elections with a keen eye in June.

And keep watching Germany for a powerful swing to the Catholic right in the federal elections of September. In the latter respect, one thing is for sure: Angela Merkel shot herself in the foot when she criticized Pope Benedict.