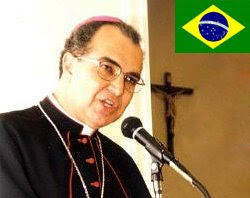 This morning the Vatican announced that Pope Benedict XVI has appointed Archbishop Orani João Tempesta to head the Church in Rio de Janerio, the most important see in Brazil, which is the most populous Catholic country in the world.

He completed his elementary and high schools studies at São José do Rio Pardo, and in 1967 he joined the Cistercian Monastery of São Bernardo in the same city.

He studied philosophy at the São Bento monastery in Brazil’s capital of São Paulo and then went on to his theological studies at the Salesian’s Pius IX Theological Institute, also in São Paulo.

He pronounced his solemn vows as a Cistercian on February 2, 1969 and was ordained a priest on December 7, 1974.

Since 1984 he has filled multiple roles at the same time. He served as the Prior of his monastery; pastor of the São Roque Parish, the Diocesan Director of Communications, and as a professor at the Diocese São João da Boa Vista’s Heart of Mary Seminary.

In September 1996, the monastery of São Bernardo was transformed into an Abbey, and Prior Tempesta was elected as its first Abbot.

On February 26, 1997 he was appointed Bishop of São José do Rio Preto. He was then elected to head the office of Communications for the Southern Region of the Brazilian Bishops' Conference (CNBB.)

On October 13, 2004, he was appointed Archbishop of Belém do Pará and in 2007 he participated at the Fifth General Conference of the Latin American Bishops in Aparecida, Brazil.

As the Archbishop of Sao Sebastiao do Rio de Janeiro, Tempesta will serve 3.6 million faithful, 605 priests, 63 deacons and 1,392 religious.